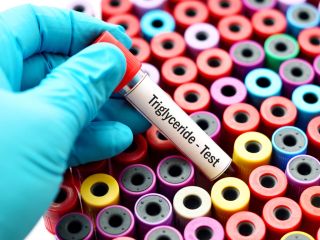 A rare genetic disorder caused three siblings' blood to flood with fat and turn "milky" white, according to a new report of the unusual case.

The three siblings consisted of one set of fraternal twins (a daughter and son) and an older son, all born to a first-cousin couple in a Pennsylvania Dutch family. In their teens and early 20s, all three siblings experienced mysterious symptoms, including bouts of abdominal pain. They had all been diagnosed with hypertriglyceridemia, a fairly common disorder that causes fatty molecules called triglycerides to build up in the blood.

Now in their 50s, the siblings recently underwent genetic testing and learned that they have a condition that's much more rare, affecting only 1 in every million people, according to the case report, published today (Nov. 18) in the journal Annals of Internal Medicine.

Those with the ultrarare disorder, known as familial chylomicronemia syndrome (FCS), may accumulate more than 1,000 milligrams of triglycerides per deciliter (mg/dL) of blood. For comparison, normal blood levels of the fat should fall below 150 mg/dL, and 500 mg/dL would be considered "very high" in a healthy person, according to the National Institutes of Health.

Indeed, in people with FCS, blood fat levels are so high that the normally crimson fluid turns the color of milk. (FCS is not the only condition that can cause milk-colored blood; the symptom may also appear in people with severe hypertriglyceridemia.)

The siblings hoped their doctors could help subdue those aggressive symptoms.

To confirm the sibling's rare diagnosis, the doctors looked to their patients' genes. Triglycerides typically build up in the blood due to multiple malfunctioning genes and other related health conditions, such as diabetes or high-blood pressure, according to the Journal of the American Board of Family Medicine. But when doctors probed the siblings' genetic code, the researchers spotted only one mutated gene that was key for breaking down triglycerides in the body.

In healthy people, the  gene contains instructions to build a protein called lipoprotein lipase (LPL), which typically coats the blood vessels that run through muscles and fatty tissues in the body, according to the Genetics Home Reference. LPL breaks down fats carried in the blood; without an adequate supply, the siblings' blood plasma ran thick with excess triglycerides.

Related: How to Speak Genetics: A Glossary

Each sibling carried two copies of the mutated LPL gene, meaning both their parents passed down the mutated genetic code to the children, the case report noted. What's more, the particular genetic mutation in the siblings had never been seen before, the authors said. The doctors placed the siblings on a fat-restricted diet, which successfully stabilized their triglyceride levels and quelled their bouts of pancreatitis. Sometimes, when triglyceride levels spike, doctors must manually replace the fat-filled blood of their patients with healthy blood from donors, Live Science previously reported. Thankfully, the siblings' condition could be curtained with diet alone.