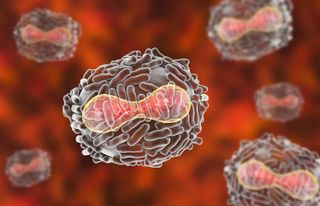 A fire reportedly broke out yesterday (Sept. 16) after an explosion at a secret lab in Russia, one of only two places in the world where the variola virus that causes smallpox is kept. One person was reported injured and transferred to a nearby burn center.

Researchers at the State Research Center of Virology and Biotechnology (also called the Vector Institute), located near Novosibirsk in Siberia, study some scary viruses, including Ebola, anthrax and Marburg. Even so, according to the institute, the fire didn't affect the building where such viruses are kept.

In a translated Russian-language statement from Vector, the lab said a gas cylinder exploded on the fifth floor of a six-story reinforced concrete lab during a repair in the so-called sanitary inspection room. "No work with biological material on the body was carried out," the statement said.

Related: Could Smallpox Ever Come Back?

A Cold War-era bioweapons lab, Vector once housed some 100 buildings and even its own cemetery where a scientist who injected himself with the highly lethal Marburg virus was reportedly buried, the Los Angeles Times reported in 2006.

According to the U.S. General Accounting Office (GAO), in 2000, a visit to the lab indicated the scientists were no longer "engaged in offensive activities." Today, the scientists there carry out research on the spread of various infectious diseases, vaccine development, virus genome sequencing, among other biomedical studies to "counter global infectious threats," according to the institute's website.

Though outside scientists can't be certain exactly where the explosion and fire occurred, one expert in the field, David Evans, said, "That doesn't sound like it was near where the variola virus is stored or where the research is conducted."

Evans, a professor in the Department of Medical Microbiology & Immunology at the University of Alberta, is one of the world's experts on poxviruses like smallpox.

Even if the fire had engulfed virus storage facilities, the risk to human health would be very low. "In general, a fire would not be likely to create an infection hazard," Evans told Live Science.

Another virologist agreed. "Incineration would in all likelihood destroy all of those viruses, including variola virus," Grant McFadden, director of the Center for Immunotherapy, Vaccines, and Virotherapy at Arizona State University, told Live Science in an email.

He added, "Fire is a risk for any biolab, but it is not a high threat of spreading live virus because most viruses are quite heat-labile when they are stored in repositories. That is why they need to be kept in deep freeze incubators for long-term storage."

Indeed, such virus samples are kept frozen and stored inside metal freezers at mind-numbing temperatures of minus 112 degrees Fahrenheit (minus 80 degrees Celsius), Evans said.

"Viruses are fragile things, and a fire in the immediate vicinity would first melt the contents and then consume them," Evans said. "The main concern with any biological collection is that if the power goes out for any length of time, samples warm and melt inside their storage vials and with viruses this can lead to a loss of infectivity."

Those freezers, he emphasized, would surely have mechanical and electrical backups for power.

The other lab authorized by the World Health Organization to hold smallpox — declared eradicated in 1980 — is the Centers for Disease Control and Prevention (CDC) in Atlanta, Georgia.