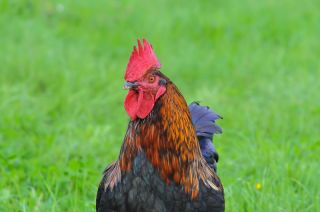 A woman in Australia who was attacked by a rooster died after the bird's pecking caused her leg to hemorrhage profusely, according to a new report of the case.

The 76-year-old woman was collecting chicken eggs on her rural property when an aggressive roster began pecking at her lower-left leg, according to the report, published Aug. 20 in the journal Forensic Science, Medicine, and Pathology. The pecking lead to a "significant hemorrhage," which caused the woman to collapse, the report said.

An autopsy revealed two small lacerations on her leg, one of which was over a large varicose vein. Doctors concluded that the woman died from "exsanguination" due to bleeding from a varicose vein following the rooster attack, the report said.

Varicose veins are swollen, twisted veins just under the skin, according to the National Institutes of Health. The condition is very common and can occur when valves inside the veins become weak or damaged.

Varicose veins are usually not harmful. But in rare cases, they can cause complications, including bleeding that is difficult to stop, according to the U.K.'s National Health Service. In a 2012 report published in the journal BMC Research Notes, researchers from Greece described the case of a 66-year-old woman who died from bleeding due to a ruptured varicose vein. Underlying conditions, such as heart disease, may increase the risk of death from varicose vein bleeding, the 2012 report said.

In the current case, the Australian woman had several underlying health conditions, including high blood pressure and type 2 diabetes.

Attacks by roosters are "very rare," Dr. Roger Byard, a professor of pathology  at the University of Adelaide and co-author of the new report, told the Australian Broadcasting Corporation (ABC).

"This case demonstrates that even relatively small domestic animals may be able to inflict lethal injuries in individuals if there are specific vascular vulnerabilities present," the authors wrote in their report.