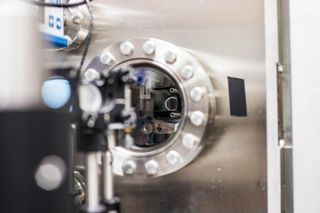 When you touch a hot surface, you're feeling movement. If you press your hand against a mug of tea, warmth spreads through your fingers. That's the sensation of billions of atoms banging together. Tiny vibrations carry thermal energy from the water to the mug and then into your skin as one molecule knocks into the next, sending it careening into a third — and so on down the line.

Heat can also cross space as waves of radiation, but without radiation, it needs stuff to pass through — molecules to bang into other molecules. Vacuums have no "stuff" in them, so they tend to trap heat. In Earth's orbit, for example, one of the biggest engineering challenges is figuring out how to cool down a rocket ship.

But now, researchers have shown that, on microscopic scales, this isn't really true. In a new paper published Dec. 11 in the journal Nature, physicists showed that little vibrations of heat can cross hundreds of nanometers of empty space. Their experiment exploited an uncanny feature of the quantum vacuum: It isn't really empty at all.

"We showed that two objects are able to 'talk' to each other across an empty space of, for example, hundreds of nanometers," said Hao-Kun Li, co-lead author of the study. Li is a physicist at Stanford University who worked on this research while he was a doctoral student at the University of California, Berkeley.

Hundreds of nanometers is an infinitesimal space in human terms — a few thousandths of a millimeter, or a bit bigger than a typical virus. But that's still far too large a gap for heat to cross, at least according to the simple models of heat transfer.

In 2011, researchers began to speculate that the quantum vacuum itself might be able to carry the molecular vibrations of heat. A paper published in the journal Applied Physics Letters pointed out that, in quantum physics, the vacuum is understood as a place roiling with energy. Random fluctuations of matter and energy pop into being and then disappear, generally at scales far smaller than people can imagine.

Those fluctuations are chaotic and unpredictable. But they could act like stepping stones to carry a wave of heat — in the form of a quantum excitation known as a phonon — across a gap. If you were a phonon setting out to cross a wide gap of, say, a few inches, the odds of the right fluctuations happening in the right order to get you across would be so low that the endeavor would be pointless.

But shrink the scale, the researchers showed, and the odds improve. At about 5 nanometers, this weird quantum hopscotch would become the dominant way to transfer heat across empty space — outpacing even electromagnetic radiation, previously thought to be the only way for energy to cross a vacuum.

Still, those researchers predicted the effect would be significant only up to a scale of about 10 nanometers. But seeing anything on a 10-nanometer scale is difficult.

"When we designed the experiment, we realized this cannot easily be done," Li told Live Science.

Even if the effect happens, the spatial scale is so small that there's no good way to measure it conclusively. To produce the first direct observation of heat crossing a vacuum, the UC Berkeley physicists figured out how to scale the experiment way up.

"We designed an experiment that uses very soft mechanical membranes," meaning they are very elastic, or stretchy, Li said.

If you pluck a rigid steel guitar string, he explained, the resulting vibrations will be much smaller than those you'd see if you plucked a more elastic nylon guitar string with the same strength. The same thing happened on the nanoscale in the experiment: Those ultra-elastic membranes allowed the researchers to see tiny heat vibrations that  otherwise would not have been visible. By carefully bouncing light off those membranes, the researchers were able to observe phonons of heat crossing the still-minuscule gap.

Down the road, Li said, this work might turn out to be useful — both to folks building regular computers and to quantum-computer designers.

A key problem in building better and faster microchips is figuring out how to disperse heat from circuits clustered into tiny spaces, Li said.

"Our finding actually implies that you could engineer the vacuum to dissipate heat from computer chips or nanoscale devices," he said.

If you were to tune the vacuum by properly shaping it with the right materials, it might — far in the future — become more effective at pulling heat off a chip than any existing medium, he said.

The techniques the researchers employed could also be used to entangle the phonons — the vibrations themselves — across different membranes. That would link the phonons on a quantum level in the same way quantum physicists already link photons, or light particles, that are separated in space. Once linked, the phonons could be used to store and transfer quantum information, to function as the "mechanical qubits" of a hypothetical quantum computer. And once cooled down, he said, the phonons should be even more efficient at long-term data storage than traditional qubits.