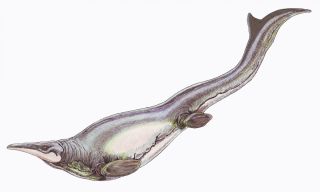 Mosasaurs such as this Plotosaurus bennisoni might have swam the breaststroke.
(Image: © Restoration illustration from Wikimedia Commons, CC BY 3.0)

Gigantic ancient sea monsters may have traveled (and terrorized) the seas using a powerful breaststroke, according to new findings.

Mosasaurs, with their alligator-like tails and lizard-like faces, were ancient marine reptiles that grew up to 50 feet (15.2 meters) long. The huge creatures – equipped with two rows of sharp teeth, powerful jaws and swift movements – were major predators in the Cretaceous period, 145.5 million to 65.5 million years ago.

To figure out how these ancient sea monsters swam so quickly to ambush their prey, a group of researchers analyzed a fossil of a type of mosasaur called Plotosaurus from the National History Museum of Los Angeles County.

Related: Photos: Ancient Sea Monster Was One of Largest Arthropods

It was previously known that these ancient sea monsters had very large pectoral girdles — the bones that support their paddle-like forelimbs. But most research suggests that the creatures used their long tails to drive them through the water in a long-distance swimming style known as "cruising," according to a statement.

But on closer examination of the Plotosaurus fossil, and measurements of the pectoral girdle established by other researchers, the group found that the pectoral girdle was large enough to support a lot of muscle attachments. The scientists also found that the pectoral girdle was asymmetric, suggesting that the creature performed an inward pull-down motion called "adduction" such as what happens when swimming by pushing water away from the body. The finding suggests that the ancient sea monster may have used its forelimbs to do the breaststroke, allowing it to move in quick bursts, according to the statement.

The mosasaur therefore could handle both long-distance swims using its tail, and short-distance sprints using tail and forelimbs, a swimming style that makes the mosasaur unique among four-limbed creatures both living and extinct, according to the statement.

"Like anything that swims or flies, the laws of fluid dynamics mean that burst versus cruising is a tradeoff," co-author Mike Habib, assistant professor of anatomical sciences at the University of Southern California, said in the statement. "Not many animals are good at both."

This research has not yet been peer-reviewed; it was presented at the annual 2019 Geological Society of America meeting in Phoenix, Arizona.