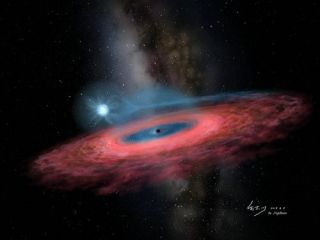 Editor's Note: The findings of this study have been called into question because of a potential error in the analysis of starlight from the companion star. That error would mean the black hole is about the size of our sun, rather than 70 times the mass of our sun.

A gigantic stellar black hole 15,000 light-years from Earth is twice as massive as what researchers thought was possible in our own galaxy.

The black hole is 70 times more massive than the sun, the scientists wrote in a new study. Previously, scientists thought the mass of a stellar black hole, formed from the gravitational collapse of massive stars, couldn't exceed 30 times that of the sun.

"We thought that very massive stars with the chemical composition typical of our galaxy must shed most of their gas in powerful stellar winds as they approach the end of their life," lead study author Jifeng Liu, deputy director-general of the Chinese Academy of Sciences' National Astronomical Observatories, said in a statement. "Therefore, they should not leave behind such a massive remnant."

It is thought that our Milky Way galaxy contains some 100 million stellar black holes, yet scientists have discovered only about two dozen of them, according to the statement. That's because, until a couple of years ago, the only way scientists could discover these giant beasts was by detecting the X-rays they emitted while they chomped away at their stellar companions. But most black holes in our galaxy don't have much of an appetite and thus don't release X-rays, the researchers explained in the statement.

So Liu and his team turned to another method: They scanned the skies with China's Large Sky Area Multi-Object Fiber Spectroscopic Telescope. Using this telescope, they searched for stars that orbit seemingly invisible objects, held on tight by the object's gravity. That's how the researchers came across one star 15,000 light-years away that was dancing around nothing — but was held in an orbit by something that could only be a black hole, they wrote.

After finding the star, which they named LB-1, the researchers used two huge optical telescopes — the Gran Telescopio Canarias in La Palma, Spain, and the Keck I telescope in Hawaii — to determine the mass of the star and its black hole companion. They found that the star was eight times more massive than the sun and orbited a black hole 70 times more massive than the sun. The star orbited the black hole every 79 days, the researchers reported.

The black hole "is twice as massive as what we thought possible," Liu said in the statement. "Now, theorists will have to take up the challenge of explaining its formation." Recently, astronomers have been challenged by discoveries that point to the existence of black holes that are more massive than experts thought was possible. For example, the Laser Interferometer Gravitational-Wave Observatory (LIGO) and Virgo gravitational-wave detectors have spotted ripples in space-time caused by the collision of black holes in distant galaxies, and these black holes are more massive than expected, according to the statement.

"This discovery forces us to re-examine our models of how stellar-mass black holes form," LIGO director and University of Florida professor David Reitze, who was not involved in the study, said in the statement. "This remarkable result, along with the LIGO-Virgo detections of binary black hole collisions during the past four years, really points towards a renaissance in our understanding of black hole astrophysics."

The findings were published Nov. 27 in the journal Nature.