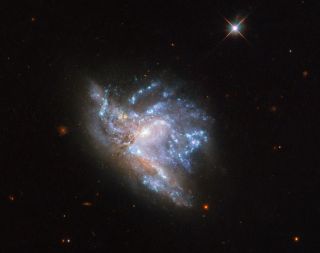 A Hubble Space Telescope image shows an object known as NGC 6052, which is made up of two relatively-nearby galaxies colliding just 230 million light years away.
(Image: © ESA/Hubble & NASA, A. Adamo et al.)

Here's the problem: Telescopes can't see far-away, ancient parts of the universe clearly enough to spot the usual signatures of galaxies merging, so there's been no good way to tell these two types of super-bright galaxies apart.

In a paper published in the July issue of the journal Monthly Notices of the Royal Astronomical Society, researchers described a new system for distinguishing distant galaxy mergers from distant galaxies that shine  super-brightly because they're birthing unusually high numbers of new stars.

In relatively nearby parts of the universe, we can easily spot galactic mergers based on tsunamis of stars on their peripheries. Long "tidal arms" of stars stretch away from the cores of galaxies that have recently merged, like arrows identifying them for stellar archaeologists sifting through space.

But light from the ancient universe has travelled too far and looks too blurry for those patterns to be visible. At the same time, the first couple of billion years of our universe's history were defined by galaxies that produced stars at high rates that would be unusual today. So, it's long been unclear which distant super-bright galaxies astronomers can see in the early universe are the results of mergers, and which are that bright all on their own.

The team reasoned that because we know what star-forming galaxies and galactic mergers look like up close, it would be relatively straightforward to create fake images and then blur and distort them as if the light from those galaxies was being captured from afar by one of our space telescopes. That’s just what the team did, creating  more than 1 million fake Hubble Space Telescopes and James Webb Space Telescope images. The astronomers knew which ones were blurry, distant images of galactic collisions versus blurry images of superbright, star-forming galaxies, even though they looked very similar at first glance. So, the researchers were able to find subtle signatures that astronomers use to distinguish galaxy mergers from galactic star factories in the distant, ancient universe. And they trained a machine-learning algorithm, on its own, to distinguish between images of the two types of galaxies.

That's a big deal because the whole universe is full of merging galaxies, the researchers said in a statement — up to 5% of galaxies are involved in mergers at any given moment, and even the Milky Way is expected to one day merge with its neighbor Andromeda.

The new method has its limits, the researchers wrote in the paper. There's always the potential for bias in the database of simulations, they wrote, and some imprecise trial-and-error is involved in generating the database in the first place. To further improve the machine learning algorithm, they wrote, and distinguish even-older galaxy mergers, they'll need to build a much bigger database.