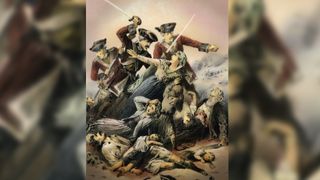 Archaeologists excavating the scene of the most infamous clan massacre in Scottish history have unearthed parts of a "lost village" in the Highlands valley of Glencoe.

The settlement featured in the 1692 massacre of the MacDonald clan of Glencoe, supposedly because they had failed to swear allegiance to King William III.

Derek Alexander, the head of archaeology for the National Trust for Scotland (NTS), said the excavations had uncovered the remains of buildings from the small township, or "clachan," of Achtriochtan, one of three main settlements along the glen that are now abandoned.

The three townships, each with fewer than a dozen buildings, are marked on a military map of the valley made in the 1750s. "It is likely that these were the settlements, although the massacre would have been 60 years before," Alexander told Live Science.

Inhabitants of Achtriochtan were among those "put to the sword" in February 1692, when government soldiers from the Campbell clan, who had been billeted in MacDonald homes in Glencoe for almost two weeks, were ordered to kill their hosts.

Witnesses said 38 men of the McDonald clan were killed outright, and dozens of others, including women and children, fled to the surrounding mountains and ridges. There, many died from exposure to the snow and winter weather.

The massacre led to a parliamentary inquiry and the dismissal of some Scottish political leaders; the event is also said to have inspired the blood-soaked "Red Wedding" scene of television's "Game of Thrones," Smithsonian.com reported.

NTS archaeologists started their excavations of the buried townships in Glencoe last year, in the hope of finding material evidence related to the 1692 massacre and any subsequent occupation of the Highlands valley.

Alexander said the latest excavations focused on the buried remains of a single house in Achtriochtan, one that's about 40 feet long by 20 feet wide (13 by 6 meters) and that might have been home to a large extended family.

It's thought that the stone walls of the house, which were up to 3 feet (1 m) wide, were covered by a layer of turf. This would have been done to insulate the houses and make them better able to withstand the mountain weather.

The NTS is holding an appeal to raise money to build a replica of the excavated house at the NTS Glencoe visitor center. The replica would use construction materials and techniques from the time, Alexander said.

The Glencoe massacre of 1692 is infamous in Scottish history, but many MacDonalds survived and reoccupied the townships of the glen, including Achtriochtan, Alexander said.

In particular, several MacDonalds of Glencoe appeared on the muster roll of the rebel army of Charles Edward Stuart, known as Bonnie Prince Charlie, who attempted, and failed, to restore his family to the British throne in the Jacobite rising of 1745.

The muster rolls sometimes included the soldiers' occupations, and the one of the MacDonalds was listed as the keeper of a "change house," or inn, in Glencoe.

The house now being excavated at Achtriochtan was located alongside the road, so the building could have served as the local change house, Alexander said.

"Whether that was any different from any other house, it is difficult to tell," he said. "It might just be that you rested your horse there, stated who you were and got something to eat, or water or whisky or something like that."

A fragment of pottery of a type known as manganese-mottled ware, a ceramic used to make tankards, had also been found within the ruined building.

It seems unlikely, however, that more-substantial material finds will be found within the house itself. "Often the buildings are where a lot of the artifacts are not. They get cleaned out again and again," Alexander said.

Instead, many artifacts were often found where they had been discarded as rubbish in what are called "midden heaps," he said. "If we do more excavations around the structures, we might find more of the material."