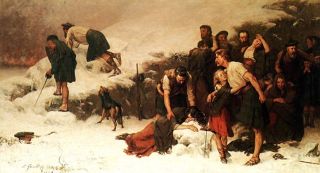 Survivors of the massacre at Glencoe fled into the steep snow-filled mountainsides, where many froze to death.
(Image: © Public Domain)

For the chief of a 17th-century Scottish clan, missing a deadline was nothing to shrug off. In fact, on Feb. 13, 1692, when he failed to swear his oath of allegiance to the king on time — possibly held back by a blizzard — a massacre ensued. Soldiers killed dozens of men, women and children who were part of the Clan MacDonald of Glencoe.

Now, archaeologists hope to find out what exactly happened on that infamous day in history. "We are trying to find remains that tie the landscape to the story of the massacre," said Derek Alexander, the head of archaeology at the National Trust for Scotland (NTS), who is leading the study team.

The team, Alexander said, will focus on three former farm settlements in Glencoe on land that is now owned by the NTS. At the time of the massacre, the settlements at Achtriachtan, Achnacon and Inverrigan in Glencoe were traditional Highland farming villages located a few miles apart, but they were later abandoned, Alexander said. [25 Grisly Archaeological Discoveries]

In the late 17th century, each of the three former farm settlements had eight to 10 stone buildings and supported 70 to 80 people linked to the Glencoe branch of the powerful MacDonald clan, Alexander said.

The villagers made their living mainly by farming some crops, like oats and barley, and by raising cattle. They often stole cattle from other clans, too, a widespread practice in the Highlands at the time, Alexander said.

In early February of 1692, two companies of soldiers, comprising about 120 men, came to Glencoe and were billeted in the settlements throughout the valley, in groups of three to five. (The duty to house government troops for a time was a common form of taxation, Alexander said.)

But on Feb. 13, after the soldiers had stayed almost two weeks in the MacDonald homes, the companies' commanding officer, Robert Campbell of Glenlyon, carried out secret orders to "put all to the sword" in Glencoe.

From around 5 a.m. local time, during a snow blizzard, the soldiers swept from the north to the south of Glencoe, gathering up more of their troops as they moved through the valley, Alexander said. Along the way, they killed MacDonald men and set fire to the cottages, he said. [In Photos: The UK's Geologic Wonders]

More government troops were placed at the north and south ends of the valley to block any escape.

According to witnesses, 38 men were killed in or outside their homes and 14 people were burned to death in one cottage.

Alexander said many more people, women and children among them, fled onto the snow-covered mountainsides, among the steep crags and ridges of Glencoe. Some survived to reach houses in the next valley, but around 40 people reportedly froze to death, he said.

An investigation by Scotland’s parliament (England and Scotland remained separate kingdoms until the Act of Union in 1707) revealed that the government ordered the Glencoe massacre as a punishment and an example to other rebellious Highlanders.

The reason? The clan chief had failed to meet a deadline to swear allegiance to King William of Scotland and England (the MacDonalds said heavy snow caused the delay).

But many accused the king's Protestant government ministers in Scotland of acting out of hatred for the rebellious and Catholic Highlanders. Most Highlanders had supported William's rival, King James of the House of Stuart, in the first Jacobite rising a few years earlier, according to the BBC.

The archaeological team from the NTS has conducted surveys at the three former MacDonald farm settlements on NTS land, where the remains consisted of the foundations of what would have been cottages built of turf and stone, Alexander said.

The first detailed investigations and excavations of the abandoned settlements would follow, he said.

The human history of the Glencoe massacre, meanwhile, has persisted as a famous Highland feud between Clan MacDonald and Clan Campbell, who made up most of the regiment of soldiers who carried out the massacre. However, there were reports that many of the soldiers were reluctant to take part and warned their hosts to flee.

According to the ethnographer Calum Maclean, many Highlanders saw the Campbell soldiers as unwilling tools of the government.

"The name of Campbell has been eternally disgraced by the events of that dark February night, not so much because the victims were dispatched without warning, but because the time-honored code of hospitality was outraged," Maclean wrote in his history book "The Highlands," published in 1975.

"Despite all that, it will surprise many to know that even to this very day in such districts as Keppoch and Moidart, both in the heart of MacDonald country, popular tradition exonerates the Campbells," Maclean wrote.