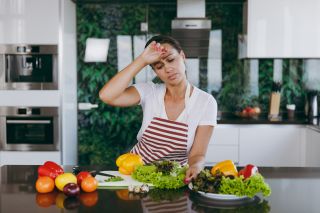 The first few weeks of a keto diet may come with a spate of flu-like symptoms, including nausea, fatigue and dizziness, according to a new study.

For the study, published today (March 13) in the journal Frontiers in Nutrition, researchers drew from the experiences of 101 people who had started a keto diet and described their symptoms across 43 online forums. Consistent with anecdotal reports of a so-called keto flu — thought to strike those who begin this sort of high-fat, moderate-protein, low-carb diet — people described their symptoms as peaking within the first seven days of a new keto diet, dwindling over time and ultimately resolving on their own after about four weeks.

"We sought to characterize the nature of keto flu, as there was a disjunct in the amount of popular media reports of its occurrence versus the academic literature," said study co-author Dr. Emmanuelle Bostock, a researcher at the Menzies Institute for Medical Research at the University of Tasmania in Australia. "We found that a number of users of online forums self-reported flu-like symptoms, usually occurring in the first few weeks of commencing the diet."

Related: 7 Tips for Moving Toward a More Plant-Based Diet

The keto diet debuted in the 1920s as a treatment for epilepsy. But more recently, the keto diet has become a health craze, as it's thought to cause weight loss by forcing the body into a state known as ketosis. When the body is in this state, cells draw most of their energy from compounds called ketones, which are derived from fatty acids. Experts are still unsure why this causes weight loss, and studies have broadly failed to demonstrate that the keto diet is more effective than other weight-loss strategies. But the keto diet appears to differ from other diets in an unexpected way: its tendency to induce flu-like symptoms, at least within the first few weeks of someone starting the diet.

"I definitely see clients experiencing the keto flu," said dietitian and nutritionist Ginger Hultin, a spokesperson for the Academy of Nutrition and Dietetics who was not involved in the study. "Some people hardly get it, some get some of these symptoms and some get it more severely."

To quantify this phenomenon, Bostock and her colleagues drew from 43 online forums to identify consistent complaints. The researchers found that, within the first few weeks of starting the keto diet, people reported a sudden onset of headaches, stomach pain, nausea and other flu-like symptoms.

The researchers said it's unclear why the keto diet would have this effect, but they suspect it may have something to do with the way the bacteria and other microbes in people's guts change when people start the keto diet.

For example, the keto diet excludes many of the foods that support our gut bacteria, such as starchy vegetables and whole grains, according to Popular Science. Given that many studies have found a connection between the brain and the gut, changes in gut bacteria could potentially result in some of the symptoms of keto flu, Popular Science reported.

What's more, many people who start a keto diet need to make drastic changes to the foods they eat in order to cut out carbs, which could lead the body to experience withdrawal-like symptoms similar to those that occur when people cut out caffeine, according to Healthline.

However, a critical limitation of the new study is that the data came entirely from online conversation threads, without any evidence that the individuals describing their symptoms were on the keto diet, let alone experiencing ketosis. "There needs to be more real clinical studies done, as this was a review of online forums," Hultin told Live Science. But Bostock hopes this preliminary study will lay the groundwork for future explorations of the side effects of the keto diet in well-designed clinical trials.