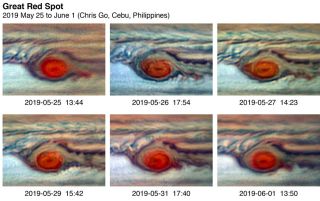 A series of images taken between May and June 2019 capture the reddish extension, or "flaking," observed on the east side of the Great Red Spot.
(Image: © Chris Go)

Despite the apparent shrinkage of clouds in Jupiter's Great Red Spot, the storm itself is still going strong, new research suggests.

Jupiter's Great Red Spot represents the most powerful storm in the solar system. While earlier studies have suggested that the storm has been shrinking since at least the 1800s, researchers from the University of California, Berkeley, argued Nov. 25 at a conference of the American Physical Society's Division of Fluid Dynamics that there is no evidence that the vortex that powers the cloud formation is changing.

"I don't think its fortunes were ever bad," Philip Marcus, a professor of fluid dynamics at the University of California, Berkeley, said in a statement released by the society. "It's more like Mark Twain's comment: The reports about [the storm's] death have been greatly exaggerated."

The Great Red Spot has been photographed by both professional and amateur astronomers. Photos captured in May and June 2019 revealed large red "flakes" spinning off from the storm, which fueled assumptions that the system is getting smaller.

However, observers don't see the storm directly, only the visible clouds above it, Marcus said. He and his colleagues suggest that the "flaking" observed around the storm is a natural consequence of storms interacting, rather than an indication that the Great Red Spot storm is itself weakening.

As a smaller storm spinning the opposite direction approaches the Great Red Spot, a point of stagnation form. Then, when a smaller storm spinning the same direction as the monster storm approaches, its clouds are shattered and flake away in a reddish extension like that observed on the east side of the storm this spring, said Marcus, whose research focuses on the fluid dynamics of vortices, waves, turbulence and hydrodynamic stability.

"These are very normal healthy activities for the Red Spot and its colleagues," Marcus said during a news conference held at the society's meeting.

In addition, Marcus said, he expects that the heating and cooling patterns around the vortex will continue to fuel the Great Red Spot.

"I think that unless something somewhat cataclysmic happens on Jupiter, it will last for the indefinite future, until the jet streams change, so I would say likely centuries," Marcus said in the news conference. "Of course, I probably just gave it the kiss of death and it'll probably fall apart next week but that's the way science works."