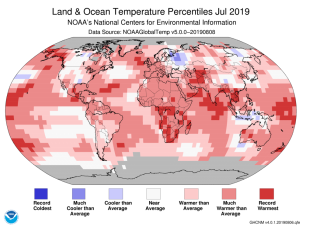 A global temperature map shows that nearly the entire planet was warmer than average this July.
(Image: © NOAA)

July was the hottest month ever recorded on Earth.

That's the word from the National Oceanic and Atmospheric Administration (NOAA), which tallied up global land and sea temperature recordings from 2019's seventh month and compared them to its 140-year data set, stretching back to 1880. The global average temperature for the month was 1.71 degrees Fahrenheit (0.95 degrees Celsius) above the 20th century average of 60.4 F (15.8 C). It was 0.05 F (0.03 C) warmer than the previous record, set in July 2016.

This new global heat record shouldn't be too surprising to anyone who read the news last month. A punishing heat wave swept across Europe and then settled over Greenland, where it triggered hundreds of billions of tons of ice melt. Sea ice in both the Arctic and Antarctic regions reached 41-year lows as well, according to NOAA.

The most unusual average temperatures took place in Alaska, western Canada and central Russia, where temperatures were at least 3.6 F (2 C) warmer than average, according to NOAA.

In 2018, the Intergovernmental Panel on Climate Change (IPCC), made up of scientists from all over the world, said that it's crucial to stop global temperatures from warming beyond 2.7 F (1.5 C) above average.

"One of the key messages that comes out very strongly from this report is that we are already seeing the consequences of 1 C [1.8 F] of global warming through more extreme weather, rising sea levels and diminishing Arctic sea ice, among other changes," Panmao Zhai, co-chair of IPCC Working Group I, said at the time.

To hold warming below that 2.7 F threshold, the IPCC said, will require "rapid, far-reaching and unprecedented changes in all aspects of society."

Ongoing efforts to reduce carbon are good news, but they're not enough, the IPCC said.