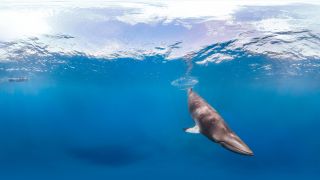 Earth's oceans are especially vulnerable to climate change, according to a new U.N. report.
(Image: © The Ocean Agency)

The fictional Lorax spoke for the trees, and now more than 100 scientists will speak for the seas, in a special climate report scheduled for release tomorrow (Sept. 25).

Issued by the Intergovernmental Panel on Climate Change (IPCC), a United Nations body made up of scientists from around the world, the Special Report on the Ocean and Cryosphere in a Changing Climate (SROCC) evaluates the latest research relating to climate change and its impacts on global ecosystems.

This new report will be the first to specifically address the impacts of a warming world on Earth's oceans and cryosphere — the parts of the planet that are covered in ice, such as glaciers, permafrost and sea ice — to outline the risks that they face, the IPCC said in a statement. Data in the report represents the work of 104 scientists from 36 countries, and it references nearly 7,000 publications, according to the statement.

Some of the topics addressed by the report will include extreme weather; sea level rise; coral reef health; ocean acidification; and threats to human communities that inhabit or depend on vulnerable marine ecosystems, according to the IPCC.

Climate change's devastating impacts are inescapable, marked in vanishing glaciers and crumbling ice sheets. Scientists recently found that devastating storms have become wetter in recent years due to climate change, and this trend could continue in the coming decades if the planet keeps heating up.

What's more, the runaway warming happening on Earth right now is unfolding faster than any other climate change event in the past 2,000 years, Live Science previously reported.

By comparison, global leaders' responses to the climate crisis have been maddeningly slow. To address that, hundreds of thousands of students abandoned their classrooms on Sept. 20, marching in cities worldwide in a Global Climate Strike and calling on politicians to take action.

"The latest analysis shows that if we act now, we can reduce carbon emissions within 12 years," U.N. representatives with the Climate Action Summit 2019 said in a statement. This would slow the rise in global average temperatures, which drive droughts, wildfires, heat waves and rising sea levels, according to NASA.

Following the release of the new report in Monaco, world leaders, scientists and conservationists will convene in New York City, to review pathways for improving ocean resilience and to identify "opportunities to advance meaningful solutions to the new report’s alarming findings on climate-related impacts on the ocean," according to a statement.