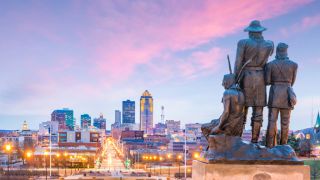 As of April 6, Iowa is reporting 946 confirmed cases of COVID-19, according to the Iowa Department of Public Health. 25 people have died from the disease. 10,653 negative tests have been conducted at the State Hygienic Lab and others in the state.

On April 2, Governor Kim Reynolds ordered that schools, non-essential businesses and medical procedures remain closed through April 30, according to KWWL News. On April 6, she extended these orders to include malls, bowling alleys, zoos, campgrounds, playgrounds and libraries, according to The Des Moines Register. Those who do not follow these guidelines, or assemble in groups larger than 10 people, will be cited with a simple misdemeanor.

Governor Kim Reynolds has not yet issued a state-wide order to "shelter in place," though several Iowa mayors have pushed for such a directive, according to the Des Moines Register. On April 1, internal documents obtained by the Iowa City Press-Citizen revealed a 12-point scale that the governor and health department are using to determine when a shelter-in-place order should be issued, the Register reported.

The scale, detailed here, considers the percentage of population greater than 65 years of age; percent of identified cases requiring hospitalization; infection rate per 100,000 people in the past 14 days; and the number of outbreaks in long term care facilities. To trigger a shelter-in-place order, Iowa must hit 10 points on the 12-point scale. "When I look at it, we'd be almost to Armageddon before [Reynolds] would issue [a shelter-in-place order]," Johnson County Board of Supervisor Chair Rod Sullivan told the Register.

Reynolds has said that calling such an order is the "last thing she wants to do," according to KCCI Des Moines. "I can't lock the state down," Reynolds said at a press briefing on March 31, the Register reported. "I can't lock everybody at home."

"I can't lock the state down," Reynolds said at a press briefing on March 31, the Register reported. "I can't lock everybody at home."

The governors of bordering states Minnesota, Wisconsin and Illinois have all issued shelter-in-place orders for their constituents, and in Missouri, Kansas City, St. Louis and St. Louis County are under equivalent directives, according to the Des Moines Register. Mayor Frank Cownie of Des Moines and Mayor Bruce Teague of Iowa City are among those calling for a stay-at-home order from the state. Mayors of Johnson County have advised residents to "only leave their homes for essential items," the Register previously reported.

Reynolds declared a state of public health disaster on March 17, an action that closed all restaurants and bars to the public, excluding food served by carry-out, drive-through and delivery. These venues will be closed until April 7, along with fitness centers, theaters, casinos, senior citizen centers and adult day care facilities. Salons, barbershops, medical spas, massage therapists, tattoo shops, tanning facilities and swimming pools are also closed.

Gatherings of more than 10 people must be canceled or postponed, per the governor's declaration, and those returning from out-of-state travel should self-isolate for 14 days.

Governor Kim Reynolds announced Sunday (March 15) that she suggests schools close for at least four weeks, according to KCCI Des Moines. A list of school closings can be found here. In accordance with this recommendation, the Iowa House and Senate waived the requirement for state schools to have to reschedule any canceled days from March 16, 2020 to April 12, 2020, according to Local 5.

The legislature has also allocated money to the State Hygienic Lab for additional COVID-19 testing and enabled the Governor to access the Emergency Economic Fund during the next 30 days for needs related to the COVID-19 outbreak.