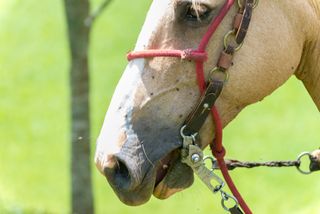 Eastern equine encephalitis was first identified in horses in 1933. Humans and horses are most susceptible to the disease.
(Image: © Shutterstock)

Eastern equine encephalitis (EEE), also referred to as triple E, is a viral illness transmitted to humans and horses by the bite of an infected mosquito. The insects pick up the virus from biting an infected bird.

Most people infected with the virus will not develop any symptoms from it, and mild forms of the illness, known as systemic infection, may resemble the flu. But about 5% of people who become infected may develop an extremely rare and potentially life-threatening infection that can cause swelling and inflammation of the brain, known as encephalitis, according to the Centers for Disease Control and Prevention (CDC).

In the United States, an average of seven human cases of encephalitic EEE were reported each year between 2009 and 2018, according to the CDC. Although only a handful of cases are reported annually, about 30% of people who develop severe encephalitic EEE die from the disease and many experience ongoing neurological problems after they recover from it, according to data from the CDC.

As its name suggests, Eastern equine encephalitis tends to occur in the eastern portion of the United States, but the illness also occurs in the south along the Gulf Coast and in the Great Lakes region.

Globally, there are four variants of the virus, but only one is endemic to North America and the Carribbean. It's also the one that causes the most human cases of EEE. The other three varieties are found in Central and South America and primarily cause equine illness, according to the CDC.

In the U.S., most cases are seen east of the Mississippi River between July and September, said Dr. Brian Chow, an infectious disease specialist at Tufts Medical Center in Boston. States with the highest numbers of reported cases of EEE between 2009 and 2018 include Florida, Massachusetts, New York, North Carolina and Georgia. Every year, cases begin popping up when the weather gets warm and mosquitoes thrive, from late spring to early fall, according to the CDC.

The EEE virus is transmitted by the bite of infected female mosquitoes. These mosquitoes are commonly found in marshlands and swampy areas and often feed on birds, Chow told Live Science.

Birds act as reservoirs for the EEE virus and can become infected without showing signs of the illness. These reservoirs then pass the virus on to mosquitoes, which can spread it to horses and other mammals, including humans, he said.

The virus was first identified in horses in 1933, and was isolated from human central nervous system tissue in 1938, according to the online Encyclopedia of Entomology. Horses and humans are the most susceptible to the virus.

Once the virus is inside the body, it can replicate and travel in the bloodstream. In rare cases the virus crosses the blood-brain barrier and infects the brain, resulting in swelling of brain tissue, or encephalitis.

The EEE virus is not contagious. It's not spread by person-to-person contact, nor is it spread from people to animals or from animals to people, according to the New York State Department of Health.

People older than 50 and younger than 15 seem to be at greatest risk of developing severe EEE infection, according to CDC statistics. Those with weakened immune systems — from undergoing cancer treatment or receiving an organ transplant, for example — are also at a higher risk.

Symptoms of the mild form of the infection may resemble the flu, with a sudden high fever, chills and aches in the muscles and joints, and the illness may last up to two weeks, Chow said.

The severe form of EEE also starts out with flu-like symptoms. But about four days after these symptoms first appear, signs of a brain infection may show up, Chow said. These symptoms may include confusion, excessive drowsiness and a bad headache, and the complications can worsen quickly, leading to seizures, coma and sometimes death, he said.

EEE is one of the most severe mosquito-transmitted diseases in the United States; approximately 1 in 3 people with the severe form of the disease die from it, usually within 10 days of the first appearance of symptoms, according to the CDC. But even those who survive this serious infection may be left with brain damage, intellectual impairment, paralysis and personality disorders.

Doctors can use a spinal tap (lumbar puncture), in which they analyze a sample of fluid surrounding the spinal cord, to detect whether the EEE virus is present. Physicians may also use other diagnostic tests, such as a CT scan or an MRI of the brain, to reveal signs of inflammation, as well as blood tests to detect high levels of antibodies, which are proteins produced by the immune system when it's fighting a virus.

Related: 10 Things You Didn't Know About the Brain

Hospitals tend to see the severe cases of EEE, and treatment is aimed at reducing the severity of symptoms as the viral infection runs its course, Chow said. Treatment for the severe form of EEE usually involves a stay in the intensive care unit, where the patient is placed on a ventilator for breathing problems and may be put in a medically induced coma.

Medications may be given to treat seizures or help relieve brain inflammation. But once the virus enters the nervous system, there are often lingering neurological consequences, Chow said. Most of the deaths linked with EEE are due to swelling and pressure inside the brain and spinal cord.

How to avoid Eastern equine encephalitis

Mosquitoes have limited range and usually travel only a mile or two from where they breed, Chow said. States where EEE activity is known to occur typically monitor and test the mosquito populations for the virus during warm-weather months and may spray insecticides in communities identified as hotspots for infected mosquitoes.

Spraying insecticide helps to reduce the threat of EEE, but it does not eliminate the risk of the illness. People should also take the following steps to protect themselves from mosquito bites: