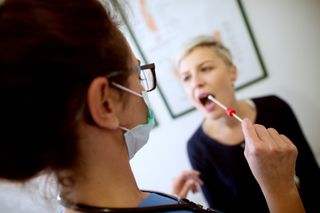 Though psychiatrists see the potential of genetic tests for depression treatment, many doctors warn that those on the market aren't up to snuff.
(Image: © Shutterstock)

Dozens of companies invite customers to swab their cheeks, spit into a tube, and find out which antidepressant is right for them.

Their products — pharmacogenomic tests — aim to predict how someone with depression will respond to medications based on that person's genetic makeup, sparing them from the trial-and-error that often comes with selecting an antidepressant. Some companies, such as Color Genomics, require that a physician order the test. But many testing products can be ordered by consumers directly.  A handful have been FDA-approved.

Though psychiatrists see the potential of these tests, many doctors warn that those on the market aren't up to snuff. They say that hundreds of genes may affect depression, and that studies demonstrating the benefit of these tests are lacking.

Depression is one of the most common mental disorders in the United States. In 2017, an estimated 17.3 million U.S. adults experienced at least one major depressive episode, meaning that they had a depressed mood and most of the associated symptoms outlined in the psychiatric diagnostic bible, the Diagnostic and Statistical Manual of Mental Disorders (DSM-5), for at least two weeks. About half of those people received treatment with medication, according to the National Institute of Mental Health.

But in the best-case scenario, common antidepressants might take six weeks or more to kick in. More often, patients try several medications over the course of months, dropping some and slowly fine-tuning the dosage for others, testing treatment combinations with their doctor's guidance. Meanwhile, these individuals may suffer unpleasant side effects, such as dry mouth and weight gain. About a third of people with depression are treatment resistant, meaning that none of the medications that they try provide relief.

Genetic test companies, such as Neuropharmagen and GeneSight, promise to cut out the guesswork — for a fee of a few hundred to a few thousand dollars, according to the Washington Post.

Similar to genetic tests used to assess cancer risk, these products scan for genes that might alter how the body processes antidepressant medications. Some tests search for gene variants that affect how quickly drugs are metabolized, whether the person assessed may have adverse reactions, or whether they’re likely to respond at all. Others tests look at genes that affect how the medications are delivered across the blood brain barrier to their target sites.

Related: 7 Diseases You Can Learn About from a Genetic Test

The genes CYP2D6 and CYP2C19, which code for liver enzymes that help break down the medications, have the most scientific evidence backing their use to guide both medication selection and dosing. (Knowledge of these genes has already shaped recommended prescribing guidelines by the Clinical Pharmacogenetics Implementation Consortium.)

But while cancer risk may be starkly impacted by a handful of key genes, depression may involve "hundreds or thousands of genes, with no single gene determining much of the risk," Bruce Cohen, a psychiatrist and neuropsychiatric researcher at McLean Hospital and Harvard Medical School, told Live Science in an email.

"These gene variants determine much less about drug metabolism or drug effects than do diet, age, other drugs someone is taking, and even the bacterial population of the gut, among other factors," said Cohen. Previously, some scientists estimated that a person's genetics may contribute to about 40% of their antidepressant response, but others place the figure closer to 2%.

What’s more, FDA approval only indicates that the tests measure the gene variants they claim to, not that using results from the tests leads to better patient outcomes, according to psychiatrists writing for Journal Watch, which summarizes the latest medical findings for medical professionals.

Larger studies and more advanced analytical models are needed to pinpoint the genes in question, and actually determine their utility in clinic, the psychiatrists said.

A 2017 review in the Journal of Clinical Psychiatry found five small, industry-funded studies in which pharmacogenetic testing improved patient recovery. But three of those studies were small, and didn’t compare results to outcomes in a control group that had not used pharmacogenetic tests. One randomized, double-blind study (meaning neither patient nor doctor knew whether a pharmacogenetic test was used to guide medication decisions) showed no significant difference in outcomes, and a second didn’t actually report how or whether physicians used the genetic information. Several other meta-analyses also failed to back the claim that using genetic tests can help guide antidepressant selection and treatment.

Genetic tests for depression hit the market 10 years ago, but have surged in popularity in the last five years. And patients keep asking about them.

"There certainly seems to be more enthusiasm for these tests among mental health care consumers than among providers," Chad Bousman, who studies the pharmacogenetics of antidepressant and antipsychotic medications at the University of Calgary in Canada, told Live Science in an email. "But ideally, these tests would be ordered and interpreted in collaboration with a health provider," Bousman said. "These tests are meant to enhance rather than replace good clinical judgment," he said.

Many more experts have chimed in with their own critiques.

In April 2018, the American Psychiatric Association's research council outlined the limitations of available tests, determining that there was "insufficient data" to support their widespread use. Six months later, the FDA issued a warning about the use of "genetic tests that claim to predict response to specific medications." The agency cautioned that many tests on the market have not earned FDA approval, and specifically called out tests for depression medications, stating that "the relationship between DNA variations and the effectiveness of antidepressant medication has never been established."

The FDA has since begun cracking down on companies selling genetic tests for unapproved uses, such as Inova Genomics Laboratory, which received a letter of warning from the agency in April 2019.

At this point, genetic tests for antidepressant efficiency lack robust proof that they actually help patients to select the right treatment. Beyond that, research suggests that tests of this type may give vulnerable people false hope. But the era of pharmacogenomic testing has just begun and psychiatrists predict that, given more research, they may one day guide decision-making in the clinic.

"The testing available today represents the early days of this rapidly evolving area," said Bousman. "As the evidence improves so will the testing."