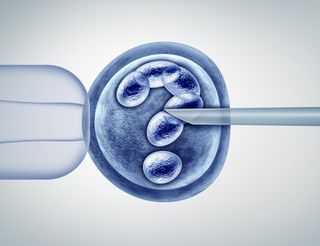 Will parents soon have the power to decide how tall or intelligent their children will be?

Ethical debate surrounds the concept of so-called "designer babies" — offspring whose embryos are either selected for certain traits or genetically engineered to boast chosen genetic traits. Once the stuff of science fiction, designer babies have become a feasible reality, as one rogue scientist recently demonstrated by creating the world's first gene-edited babies.

Although gene-editing generates a lot of buzz, a new study, published today (Nov. 21) in the journal Cell, highlights an alternate technique for generating designer babies: selecting "superior" embryos by first screening their DNA.

Clinicians already use a technique called "preimplantation genetic testing" (PGT) to screen embryos that are generated through in vitro fertilization (IVF) — a procedure where doctors combine parents' sex cells in the lab and later implant the resulting embryo into a person's uterus. Clinicians use PGT to spot genetic mutations that could lead to disease, but potentially, the same procedure could be used to cherry-pick desirable traits like height and intellect.

Besides the ethical dilemmas, the idea of selecting "optimal" embryos based on their genes has one key flaw: No one knows if it would actually work.

Related: How to Speak Genetics: A Glossary

"People can argue if it's a good idea or bad idea, but … people didn't really know whether it was going to work or not," said co-author Shai Carmi, whose lab studies statistical and population genetics at The Hebrew University of Jerusalem. Carmi and his colleagues used a combination of genetic data, computer models and real-world case studies to investigate whether scientists could really use PGT to ensure that a given child would grow to be incredibly tall or especially smart.

Turns out, the science just isn't there yet.

"If we look at the snapshot of what we can achieve today with the current technology … the gains are rather limited, in particular for IQ," Carmi said. According to the team's models, in the best-case scenario, embryos screened for height-enhancing genes may gain only about 1.2 inches (3 centimeters) of height on average. Embryos screened for intellect may  gain only about 3.0 IQ points, on average. In reality, the benefits would likely be less substantial, and none could be guaranteed.

In other words, a designer baby's IQ could "end up being much lower or much higher than what is expected," Carmi said.

"A lot of uncertainty"

To reach their conclusions, Carmi and his co-authors gathered complete sets of DNA from real people and paired each person's DNA with another's. These "pairs" acted as imaginary couples for their computer model. They then crafted 10 virtual embryos by combining each couple's DNA and screened the embryos for genes linked to height and cognitive ability.

A myriad of genes affect how tall and how bright a given person will be, Carmi said. In previous studies, scientists pinpointed these special DNA segments by poring over the genomes of hundreds of thousands of individuals. The researchers then condensed the mountain of data into "polygenic scores," a metric that tallies how much influence different genes hold over a particular trait.

They calculated two polygenic scores for their imaginary embryos:  for height and IQ. For each fictional couple, the team selected the top-ranking embryo for each trait — theoretically, the top embryos should produce the tallest and smartest kiddos, they predicted.

But the difference between the "best" and "worst" scoring embryos proved to be relatively small.

"The conclusion is that the embryos aren't that different from each other," said Dr. Sinem Karipcin, a fertility specialist and director of the program for preventing genetic diseases at the Columbia University Fertility Center, who was not involved in the study. Given that each set of 10 embryos stemmed from the same imaginary parents, the lack of genetic diversity is not that surprising, Karipcin said. Two sets of DNA can only combine in so many ways, and the same limitation would apply to real parents trying to select designer embryos.

What's more, polygenic scores for height and IQ may not be very useful for predicting a person's actual height and intelligence, Carmi said. Using 28 families as a case study, the authors applied their computer model to real parents and their grown-up children. With each family's genetic data, the team made predictions as to which child should be tallest, then checked their work against each sibling's true heights.

Even in their simulated models, the researchers found that a designer baby's true height may vary by about 2 to 4 inches (5-10 cm) from the predicted value. IQ could vary by nearly 20 points in either direction.

The true value of genetic screening

Beyond the inherent uncertainty of genetics, other factors cloud the predictive accuracy of polygenic scores for height and IQ, the authors noted. Environmental conditions, such as nutrition and upbringing, also shape children's physical and cognitive development and can't be captured through genetic screening. Polygenic scores are overwhelmingly based on European DNA, meaning the metric may hold little value for people of other ancestries, Karipcin said. In their study, the authors also worked with an unusually high number of embryos, she added.

A young couple may produce five to eight embryos through IVF, granting clinicians options to work with, Karipcin said. But after age 35, a mother may be able to produce only one or two viable embryos through the procedure, she said. Besides being few in number, about 40% of the 35-year-old's embryos may contain an abnormal number of chromosomes. Chromosomes package DNA into X-shaped bundles, and humans usually carry 23 pairs of these structures per cell. In most cases, people can’t survive with an abnormal number of chromosomes — those who do survive are born with developmental disorders, such as Down syndrome or Turner syndrome, according to the University of Utah.

By the time the potential mother reaches age 43, about 90% of her IVF embryos may bear too many or too few chromosomes, Karipcin said.

At that point, ranking the handful of embryos for height or intelligence would likely be a fruitless exercise. Even if this biological constraint didn't exist, Karipcin said, she doubts that many parents would opt to use genetic testing to customize their children's looks and abilities. Parents seem more concerned about ensuring that their children grow up healthy and unscathed by disease, rather than incredibly tall, she said.

Karipcin regularly uses PGT to screen embryos for genetic quirks, such as single-gene mutations or extra chromosomes, and can reliably predict if a given embryo may develop into a child with Down syndrome, cystic fibrosis, muscular dystrophy or Fragile X syndrome. The hopeful parents also undergo genetic testing to see whether they carry any heritable diseases that they could pass on to their children.

"If both parents are carriers, [PGT] is the only way to guarantee that they will not transmit the disease to their children," Carmi confirmed. So, while parents can't yet customize their child's height, they could use genetic screening to improve their future health.