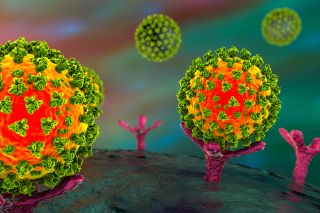 An illustration showing the SARS-CoV-2 virus binding to an ACE2 receptor on a human cell.
(Image: © Shutterstock)

The new coronavirus, known as SARS-CoV-2, may be using part of the human body's own immune response against us, a new study suggests.

The novel coronavirus is known to use a keyhole called the ACE2 receptor to "unlock" a cell and get inside, where it replicates and wreaks havoc. Now, researchers have found that the gene that encodes the ACE2 receptor may be stimulated by interferons, one of the body's main defenses against viruses. When a foreign pathogen invades, interferons act like "first responders"; the immune system releases these proteins to alert other cells that there's a pathogen in the body.

But when interferons rush to alert the body to the coronavirus, they're actually stimulating the gene that ramps up expression of ACE2 receptors, which may lead to more ACE2 production and allow SARS-CoV-2 to infect even more cells.

ACE2 is much more than just a portal for a virus; it plays a critical role in normal lung function and in the circulatory system, said study co-senior researcher Jose Ordovas-Montanes, a principal investigator in the Division of Gastroenterology at Boston Children's Hospital.

Normally, the ACE2 receptor puts the brakes on a circuit that could cause high blood pressure, said Ordovas-Montanes, who is also an assistant professor of pediatrics at Harvard Medical School. The receptor also helps to stop blood vessels from becoming leaky.

"Here we have a situation where a virus targets ACE2 as a principal entry route into cells, and at the same time can disable its normal function," Ordovas-Montanes told Live Science. By targeting ACE2, SARS-CoV-2 "could be exploiting our own antiviral defenses and tissue-protective responses simultaneously," he said. However, "more research needs to be done to understand if this is the case."

Related: The 12 deadliest viruses on Earth

This finding is important, given that interferons are being tested as a possible treatment for the new coronavirus. However, it's still unclear whether an interferon treatment would help or harm patients.

"It might be that in some patients, because of the timing or the dose, interferon can contain the virus, while in others, interferon promotes more infection," Ordovas-Montanes said in a statement. "We want to better understand where the balance lies and how we can maintain a productive antiviral response without producing more target cells for the virus to infect."

The researchers had a head start, of sorts, against SARS-CoV-2. Ordovas-Montanes and study co-senior researcher Alex Shalek, Pfizer-Laubach Career Development associate professor of chemistry at MIT, were already studying the different types of cells in the respiratory system and intestine when COVID-19 hit the world. They had previously collected data on humans, other primates and mice.

"We were perfectly primed to identify which cells may be primary targets for viral infection in human nasal, lung and intestinal samples," Ordovas-Montanes told Live Science.

Earlier research had revealed that SARS-CoV-2 docks onto cells with ACE2 receptors with the help of an enzyme known as TMPRSS2. This enzyme slices the spike protein of the virus to activate it and allow the virus to enter the cell, Ordovas-Montanes said.

"Without this docking and activation on a cell, the virus is not as effective at gaining entry," he said. "These two factors appear almost essential."

This led Ordovas-Montanes, Shalek and their colleagues to ask the question: Which cells in the respiratory tract and intestine express both ACE2 and TMPRSS2?

To investigate, the team used a technique known as single-cell RNA-sequencing, which looks at each cell as an individual, rather than as an "average" mixture of cells, Ordovas-Montanes said.

"If you consider each cell to be a unique person within a room of people, the best way to get to know everyone is by having a conversation with them individually, rather than assuming any averages, which could be misleading," he explained.

This experiment showed that less than 10% of human respiratory and intestinal cells make both ACE2 and TMPRSS2. These cells fall into three categories: goblet cells in the nose that make mucus in the upper airway; type II pneumocytes, which provide support for oxygen exchange in the lungs; and ileal absorptive enterocytes, a type of cell that lines the intestine and helps with nutrient absorption.

"All three [are] essential for tissue function," Ordovas-Montanes said. "We are now collaborating with groups at the Broad Institute and worldwide through the Human Cell Atlas community to understand the true viral targets from COVID-19 samples."

After identifying these cells, the researchers realized that all three cell types had something in common: There was a recurrent pattern of genes being turned on by interferons in these cells. The team wondered whether some of those genes included those for ACE2, which could lead to more of the receptor on the cells.

"We could find nothing in the literature to support this idea," Ordovas-Montanes said.

Undeterred, they pushed on. Surprisingly, the team found that in primary epithelial cells in the human airway, interferon did lead to more ACE2 gene expression in a dose-dependent fashion. "That is, as you add more interferon, you get more ACE2 expression," he said.

However, increased gene expression doesn't always mean that the protein (that is, the receptor) gets made. That's an experiment for another study, he said.

Now, the team wants to explore what SARS-CoV-2 is doing in the cells it infects. They plan to study tissue samples from children and adults, so they can figure out why youngsters are generally less affected by the virus than adults.

A preprint of study was published online April 21 in the journal Cell.