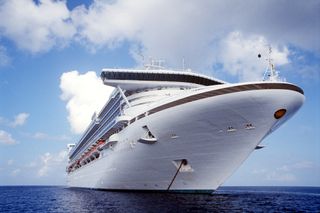 A photo of the Grand Princess, which is being held off the California coast while passengers are tested for coronavirus.
(Image: © Robert Cross/Chicago Tribune/Tribune News Service via Getty Images)

A cruise ship with a suspected coronavirus outbreak is being held off the coast of California, where federal officials will screen people on board for the virus that causes the disease COVID-19. Two people who were on a previous cruise on the ship tested positive for the virus, and one has died.

The two passengers who tested positive took a cruise to Mexico on Feb. 11 and returned to San Francisco on Feb. 21, the San Francisco Chronicle reported. On Wednesday (March 4), one of those passengers became the state's first reported COVID-19 death, according to CNN. The man, a 71-year-old resident of Placer County, east of San Francisco, had underlying health conditions.

After docking in San Francisco, the ship, known as the Grand Princess and operated by Princess Cruises, headed to Hawaii. Sixty-two people still on the ship overlapped with the passengers who tested positive, and 21 people (including 11 passengers and 10 crew) are now showing symptoms.

As a result, the Grand Princess cut its voyage short and is headed to San Francisco Bay, according to CNN. Everyone who was on the previous trip has been confined to their rooms. Officials will airlift 200 COVID-19 test kits to the ship, and everyone who is showing symptoms, or who overlapped with the sick passengers, will be tested, the San Francisco Chronicle reported.

Medical staff already aboard the ship will administer the tests, which will then be retrieved by helicopter and delivered to a facility in Richmond, California, for examination.

Another cruise ship from Princess Cruises, the Diamond Princess, became the site of a quarantine in a Tokyo port in early February when the virus began spreading aboard. The ship has since been evacuated, but not before hundreds of people became infected with the coronavirus, called SARS-CoV-2, according to the Associated Press.

The U.S. government has not yet delivered on its promise to develop and widely distribute tests for the illness, and in turn, many cases have likely gone undetected. COVID-19 is already spreading in the U.S., with at least 162 cases as of March 5. Fifty-four of those cases are in California. In most cases, the symptoms are mild, but a small fraction of people may have severe symptoms.