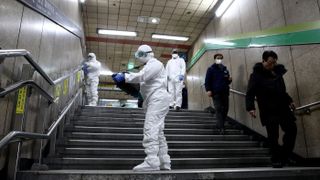 As the number of coronavirus cases reported outside of mainland China continues to climb, the World Health Organization (WHO) said it's still too soon to declare the outbreak a pandemic.

"Does this virus have pandemic potential? Absolutely, it has. Are we there yet? From our assessment, not yet," Tedros Adhanom Ghebreyesus, the director-general of WHO, said in a news briefing today (Feb. 24).

The decision of whether to call the outbreak a pandemic is based on several factors, including "the geographical spread of the virus, the severity of disease it causes and the impact it has on the whole of society," Ghebreyesus said. Right now, "we are not witnessing the uncontained global spread of this virus, and we are not witnessing large-scale severe disease or death," he said.

In recent days, there has been a surge in COVID-19 cases in South Korea, Italy and Iran. Ghebreyesus called these increases "deeply concerning."

Ghebreyesus added that this is not the time to focus on what word we use to describe the global situation. "That will not prevent a single infection today, or save a single life today."

But "this is a time for all countries, communities, families and individuals to focus on preparing," he said.

To prepare for the new coronavirus, countries should prioritize protecting health care workers from infection as they care for those with the virus, Ghebreyesus said.

In addition, countries should prioritize protecting people who are most at risk of severe disease, including the elderly and people with underlying health conditions. Officials should also do their utmost to contain epidemics of the virus in countries that have the capacity to contain it, to prevent the virus from spreading to countries that do not have such resources, he said.

The WHO has already declared the coronavirus outbreak a "public health emergency of international concern."

Ghebreyesus also shared new findings from WHO's team in China. The team found that the outbreak in China peaked between Jan. 23 and Feb. 2, and that it has been declining since then. Those with mild cases of COVID-19 appear to recover in about two weeks, while people with severe or critical disease recover within three to six weeks. The death rate is between 2% and 4% in Wuhan (the city where the outbreak began), and 0.7% outside of Wuhan, the team found.