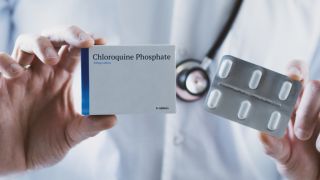 Yesterday (March 19), President Donald Trump boasted about the "very encouraging results" of two drugs called chloroquine and hydroxychloroquine as treatments for the novel coronavirus, claiming that the medications have "gone through the approval process" and that "we’re going to be able to make that drug available almost immediately."

But the U.S. Food and Drug Administration (FDA) swiftly issued a statement to clarify that, no, these drugs are not approved as treatments for COVID-19, the disease caused by the coronavirus SARS-CoV-2. Both drugs are approved to treat malaria, lupus and rheumatoid arthritis, but must still be assessed in clinical trials before being declared a safe and effective COVID-19 treatment. Doctors in the U.S. have wide latitude to prescribe drugs "off-label," meaning for conditions beyond their initial FDA approval.

"We understand and recognize the urgency with which we are all seeking prevention and treatment options for COVID-19. FDA staff are working expeditiously on that front," FDA commissioner Dr. Stephen M. Hahn said in the statement. "We also must ensure these products are effective; otherwise we risk treating patients with a product that might not work when they could have pursued other, more appropriate, treatments."

So could drugs for malaria and lupus actually cripple the novel coronavirus?

Possibly — and here's why.

The science behind chloroquine

First developed in the 1940s, chloroquine earned FDA approval as a malaria treatment in 1949 and long stood as the go-to treatment for the disease, according to the DrugBank database.

Scientists raised the possibility that chloroquine and its derivative hydroxychloroquine might be effective at treating COVID-19 after reviewing a 2005 report published in the journal Virology, which examined the related virus SARS-CoV, Dr. Len Horovitz, an internist and pulmonary specialist at Lenox Hill Hospital in New York City, told Live Science. The study revealed that chloroquine could prevent the spread of the SARS-CoV virus, which caused severe acute respiratory syndrome nearly 20 years ago, in primate cells grown in culture.

Chloroquine interferes with the virus's ability to replicate in two ways. First, the drug enters compartments called endosomes within the cell membrane. Endosomes tend to be slightly acidic, but the chemical structure of the drug boosts their pH, making the compartments more basic. Many viruses, including SARS-CoV, acidify endosomes in order to breach the cell membrane, release their genetic material and begin replication; chloroquine blocks this critical step.

The drug also prevents SARS-CoV from plugging into a receptor called angiotensin-converting enzyme 2, or ACE2, on primate cells, according to the 2005 report. When the virus inserts its spike protein into the ACE2 receptor, it sets off a chemical process that alters the structure of the receptor and allows the virus to infect. An adequate dose of chloroquine appears to undermine this process, and in turn, viral replication in general, the authors noted.

"It was thought that whatever pertained to SAR-CoV-1 might apply to SARS-CoV-2," Horovitz said.

In February, a research group led by virologist Manli Wang of the Chinese Academy of Sciences put the idea to the test and found that chloroquine successfully stopped the spread of SARS-CoV-2 in cultured human cells. Preliminary reports from China, South Korea and France suggest that the treatment is at least somewhat effective in treating human patients, and some hospitals in the U.S. have begun administering the drug, according to The New York Times. In addition, the FDA is organizing a large clinical trial to formally assess the drug's effects, the Times reported.

However, due to a short supply of chloroquine in China, and the fact that an overdose can lead to acute poisoning or death in humans, Wang's team also investigated the closely related drug hydroxychloroquine. Though it shares a similar structure, hydroxychloroquine shows lower toxicity in animals than its chemical cousin and remains widely available as a treatment for lupus and rheumatoid arthritis, the authors noted.

Wang's team tested hydroxychloroquine in primate cells and found that, like chloroquine, the drug prevented SARS-CoV-2 replication, according to a report published March 18 in the journal Cell Discovery. As of Feb. 23, seven clinical trials had been registered in the Chinese Clinical Trial Registry to test the drug's effectiveness against COVID-19 infection, the authors noted.

In the U.S., the University of Minnesota is studying whether taking hydroxychloroquine can protect people living with infected COVID-19 patients from catching the virus themselves, according to the Times.

Both chloroquine and hydroxychloroquine have been in short supply since earlier this month, according to the American Society of Health-System Pharmacists. But on March 19, the pharmaceutical company Bayer donated 3 million tablets to the federal government, and Novartis, Mylan and Teva are moving to follow suit, according to FiercePharma.

Although we won't know the results of these trials for some time, the advantage of trying out chloroquine and hydroxychloroquine as COVID-19 treatments is that the drugs' safety profiles are well understood, Horovitz said. Both drugs are generally well tolerated at prescribed doses but can cause stomach pain, nausea, vomiting, headache and more rarely, itchiness, according to the Centers for Disease Control and Prevention (CDC). When taken in high doses over many years, the drugs can cause a rare eye condition known as retinopathy.

Both medications can interact with other drugs and doses should be adjusted to account for drug interactions. Those with psoriasis should not take either drug, the CDC notes. In their current form, the drugs are also not safe for those with heart arrhythmia, or those with impaired kidneys or liver, the Times reported.

Assuming the drugs are well tolerated in clinical trials and seem effective at treating COVID-19, the FDA will take measures to increase the nation's supply, according to Hahn.

"If clinical data suggests this product may be promising in treating COVID-19, we know there will be increased demand for it," Hahn said in the FDA statement. "We will take all steps to ensure chloroquine remains available for patients who take it to treat severe and life-threatening illnesses such as lupus."