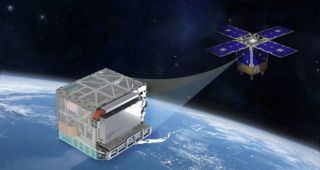 NASA has switched on a new, super-precise, space-based atomic clock that the agency hopes will one day help spacecraft drive themselves through deep space without relying on Earthbound clocks.

It's called the Deep Space Atomic Clock (DSAC), and it works by measuring the behaviors of mercury ions trapped in its small frame. It's been in orbit since June, but it was first successfully activated on Aug. 23. It's not at all flashy — just a gray box about the size of a four-slice toaster and full of wires, Jill Seubert, an aerospace engineer and one of the leaders of the project at NASA, told Live Science. But that unassuming size is the point: Suebert and her colleagues are working to engineer a clock small enough to load onto any spacecraft and precise enough to guide complicated maneuvers in deep space without any input from its refrigerator-sized cousins on Earth.

You need a precise clock to find your way around space because it's big and empty. There are few landmarks by which to judge your position or velocity, and most are too far away to offer precise information. So every decision to turn a ship or fire its thrusters, Seubert said, begins with three questions: Where am I? How fast am I moving? And in what direction?

The best way to answer those questions is to look at objects for which the answers are already known, like radio transmitters on Earth, or GPS satellites following known orbital tracks through space. Send out a signal at light speed with the precise time at  point A and measure how long it takes to get to point B. That tells you the distance between A and B. Send two more signals from two more locations, and you'll have enough information to figure out exactly where point B is in three-dimensional space. (This is how the GPS software on your phone works: by constantly checking the minute differences in time signatures broadcast by different orbiting satellites.)

To navigate space, NASA currently relies on a similar but less precise system, Seubert said. Most of the atomic clocks and broadcasting equipment are on Earth, and they collectively form what’s known as the Deep Space Network. So NASA usually can't calculate a spacecraft's position and velocity from three sources in one go. Instead, the agency uses a series of measurements as both Earth and the spacecraft move through space over time to nail down the spacecraft's direction and position.

For a spacecraft to know where it is, it needs to receive a signal from the Deep Space Network, calculate the time it took for the signal to arrive and use the speed of light to determine a distance."To do this very precisely, you need to be able to measure those times — the signal-sent and signal-received times — as precisely as possible. And on the ground, when we're sending these signals from our Deep Space Network, we have atomic clocks that are very precise and accurate," Seubert said. "Up until now, the clocks that we have had that are small enough and low-power enough to fly on a spacecraft, they're called ultrastable oscillators, which is a complete misnomer. They're not ultrastable. They record that signal-received time, but it's very low-accuracy."

Because the location data aboard the spacecraft is so unreliable, figuring out how to navigate — when to turn on a thruster or change course, for instance — is much more complicated and has to be done on Earth. In other words, people on Earth are driving the spacecraft from hundreds of thousands or millions of miles away.

"But if you could record that signal-received time on board very accurately with an atomic clock, now you have the opportunity to collect all of that tracking data on board and design your computer and your radio such that the spacecraft can drive itself," she said.

NASA and other space agencies have put atomic clocks in space before. Our entire GPS satellite fleet carries atomic clocks. But, for the most part, they're too inaccurate and unwieldy for long-term work, Seubert said. The environment in space is much rougher than a research lab on Earth. Temperatures change as the clocks pass in and out of sunlight. Radiation levels go up and down.

"It's a well-known problem of spaceflight, and we typically send up radiation-hardened parts that we have demonstrated can operate in different radiation environments with similar performances," she said.

But the radiation still changes the way the electronics operate. And those changes impact the sensitive equipment atomic clocks use to measure time slipping by, threatening to introduce inaccuracies. Multiple times a day, Seubert pointed out, the Air Force uploads corrections to the GPS satellites' clocks to keep them from drifting out of sync with clocks on the ground.

The goal of the DSAC, she said, is to establish a system that's not only portable and simple enough to be installed on any spacecraft but also hardy enough to operate in space over the long term without requiring constant adjustments from Earth-based teams.

In addition to allowing for more precise deep-space navigation using Earthly signals, such a clock might one day let astronauts on distant outposts get around just as we do with our mapping devices on Earth, Seubert said. A small fleet of satellites equipped with DSAC devices could orbit the moon or Mars, functioning in place of Earthly GPS systems, and this network would not require corrections several times a day.

Down the road, she said, DSACs or similar devices might play a role in pulsar navigation systems, which would track the timing of things like the pulsing of light from other star systems to allow spacecraft to navigate without any input from Earth.

For the next year, though, the goal is to get this first DSAC functioning properly as it orbits close to Earth.

"What we need to do is essentially learn how to tune the clock to work properly in that environment," Seubert said.

The lessons the DSAC crew learns while tuning the device this year should prepare them to use similar devices on longer-range missions down the road, she added.