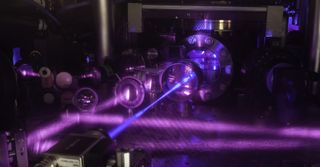 To make this quantum gas atomic clock, researchers used multiple lasers to cool strontium atoms and trap them in a grid of light. Then, a blue laser beam excites the cube-shaped cloud of the atoms.
(Image: © G.E. Marti/JILA)

A new kind of atomic clock is more precise than any yet built, with the ability to tick smoothly for a thousand times the lifetime of the universe. In addition to being the best timekeeper to date, the new so-called quantum gas clock might one day offer insights into new physics.

Researchers at JILA (formerly also referred to as the Joint Institute for Laboratory Astrophysics) used a combination of strontium atoms and an array of laser beams to create a clock so precise it might be able to measure the interaction of gravity at smaller scales than ever before. In doing so, it might shed light on the nature of its relationship to other fundamental forces, a mystery that has baffled physicists for decades.

Atomic clocks measure time by using the vibrations of atoms like a very precise metronome. Current atomic clocks are off by seconds over tens of billions of years. This newest iteration stays precise enough that it will be off by only 1 second over about 90 billion years. [5 of the Most Precise Clocks Ever Made]

To get that kind of precision, the team chilled strontium atoms to keep them from moving around and bumping into one another — something that can throw off their vibrations. First, they hit the atoms with lasers. When hit by the photons in the lasers, the atoms absorbed their energy and re-emitted a photon, losing kinetic energy and getting colder. But that didn't cool them enough. So to get them even colder, the team relied on evaporative cooling, allowing some of the strontium atoms to evaporate and accept yet more energy. They were left with between 10,000 and 100,000 atoms, at a temperature of only 10 to 60 billionths of a degree above absolute zero, or minus 459 degrees Fahrenheit (minus 273 degrees Celsius).

The cold atoms were trapped by a 3D arrangement of lasers. The beams were set up to interfere with each other. As they did so, they created regions of low and high potential energy, called potential wells. The wells act like stacked egg cartons, and each one holds a strontium atom.

The atoms got so cold that they stopped interacting with each other — unlike a normal gas, in which atoms are running around randomly and bouncing off their fellows, such cooled atoms remain quite still. They then start to behave in a way that is less like a gas and more like a solid, even though the distance between them is much larger than what's found in solid strontium. [8 Ways You Can See Einstein's Theory of Relativity in Real Life]

"From that point of view, it's a very interesting material; it now has properties as if it is a solid state," project leader Jun Ye, a physicist at the National Institute of Standards and Technology, told Live Science. (JILA is jointly operated by the NIST and the University of Colorado at Boulder.)

At this point, the clock was ready to start keeping time: The researchers hit the atoms with a laser, exciting one of the electrons orbiting the strontium's nucleus. Because electrons are governed by the laws of quantum mechanics, one can't say what energy level the electron is in once it is excited, and can only say that it has a probability of being in one or another. To measure the electron, after 10 seconds, they fired another laser at the atom. That laser measures where the electron is located around the nucleus, as a photon from the laser gets re-emitted by the atom — and how many times it oscillated in that period (the 10 seconds).

Averaging this measurement over thousands of atoms is what gives this atomic clock its precision, just as averaging the beats of thousands of identical pendulums will give one a more precise idea of what the period of that pendulum should be.

Until now, atomic clocks had only single "strings" of atoms as opposed to a 3D lattice, so they could not take as many measurements as this one did, Ye said.

"It's like comparing watches," Ye said. "Using that analogy, the laser pulse on the atoms kicks off a coherent oscillation. Ten seconds later we turn on the pulse again and ask the electron, 'Where are you?'" That measurement is averaged over thousands of atoms.

Keeping electrons in that in-between state is difficult, Ye said, and that's another reason the atoms need to be so cold, so that the electrons don't accidentally touch anything else.

The clock can essentially measure seconds down to 1 part in trillions. This ability makes more than a really good timekeeper; it might aid in searches for phenomena such as dark matter, Ye said. For example, one could set up an experiment in space using such an accurate timer to see if atoms behave differently from what conventional theories predict.

The study is detailed in the Oct. 6 issue of the journal Science.