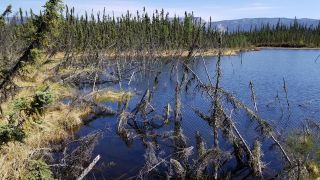 Arctic permafrost can thaw so quickly that it triggers landslides, drowns forests and opens gaping sinkholes. This rapid melt, described in a new study, can dramatically reshape the Arctic landscape in just a few months.

Fast-melting permafrost is also more widespread than once thought. About 20% of the Arctic's permafrost — a blend of frozen sand, soil and rocks — also has a high volume of ground ice, making it vulnerable to rapid thawing. When the ice that binds the rocky material melts away, it leaves behind a marshy, eroded land surface known as thermokarst.

Previous climate models overlooked this kind of surface in estimating Arctic permafrost loss, researchers reported. That oversight likely skewed predictions of how much sequestered carbon could be released by melting permafrost, and new estimates suggest that permafrost could pump twice as much carbon into the atmosphere as scientists formerly estimated, the study found.

Frozen water takes up more space than liquid water, so when ice-rich permafrost thaws rapidly — "due to climate change or wildfire or other disturbance" — it transforms a formerly frozen Arctic ecosystem into a flooded, "soupy mess," prone to floods and soil collapse, said lead study author Merritt Turetsky, director of the Institute of Arctic and Alpine Research (INSTAAR) at the University of Colorado Boulder.

"This can happen very quickly, causing relatively dry and solid ecosystems (such as forests) to turn into lakes in the matter of months to years," and the effects can extend into the soil to a depth of several meters, Turetsky told Live Science in an email.

Across the Arctic, long-frozen permafrost is melting as climate change drives global temperatures higher. Permafrost represents about 15% of Earth's soil, but it holds about 60% of the planet's soil-stored carbon: approximately 1.5 trillion tons (1.4 trillion metric tons) of carbon, according to the National Snow and Ice Data Center.

When permafrost thaws, it releases stored carbon into the atmosphere. This release can then speed up global warming; this cycle is known as climate feedback, the scientists wrote in the study.

And yet, rapid thawing from permafrost is "not represented in any existing global model," study co-author David Lawrence, a senior scientist with the National Center for Atmospheric Research, said in a statement.

Abrupt permafrost thaw was likely excluded from prior emissions models because it represents such a small percentage of the Arctic's land surface, Turetsky explained.

"Our study proves that models need to account for both types of permafrost thaw — both slow and steady change as well as abrupt thermokarst — if the goal is to quantify climate feedbacks in the Arctic," Turetsky added.

The findings were published online Feb. 3 in the journal Nature Geoscience.