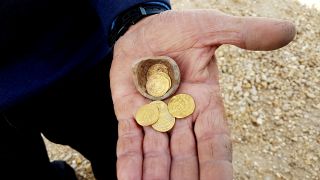 The 7 gold coins were found in a small broken jar near a pottery kiln, and may have been a potter's personal piggy bank.
(Image: © Liat Nadav-Ziv, Israel Antiquities Authority)

As Hanukkah ended last week, archaeologists in central Israel discovered a hidden trove of 1,200-year-old coins near an ancient pottery studio in the city of Yavne, between Jerusalem and the Mediterranean Sea. In a news release, researchers from the Israeli Antiquities Authority (IAA) likened the stash of seven gold pieces to "Hanukkah gelt" (those foil-covered chocolate coins that bless Jewish parents with eight nights of stains to clean up), though the coins date to the ninth century, when Israel was under Islamic rule.

According to Robert Kool, a coin expert with the IAA, one of the pieces reportedly dates to the reign of Caliph Haroun A-Rashid (A.D. 786-809), who later became a central character in the folk story collection "One Thousand and One Nights."

Related: The 10 Most Interesting Biblical Discoveries of 2019

"The hoard also includes coins that are rarely found in Israel," Kool said in a statement. These include gold coins issued by Islamic rulers in North Africa (in modern-day Tunisia), Kool said.

Archaeologists found the coins in a small broken jug near the entrance to one of many ancient pottery kilns in Yavne, which appears to have been a hub of commercial pottery production from the seventh to the ninth centuries. Ceramic pots were versatile vessels used for storage, food preparation and dining, but the broken pot that contained the coins may have been a potter's personal "piggy bank," the team said.

The kiln was uncovered during a large-scale excavation of Yavne, prior to the construction of a new neighborhood there. Other sections of the dig have revealed significantly older buildings, including a wine-making facility dating to the Persian period (fourth to fifth century B.C.). The facility included way more wine vats than would have been needed to satisfy the local population, the archaeologists wrote, which means Yavne was likely a booming center of wine production — and therefore would have probably been a fun place to celebrate Hanukkah, after all.