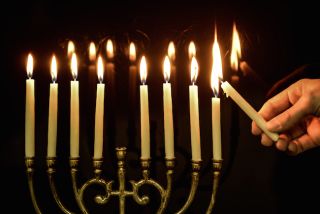 Hanukkah, the "Festival of Lights," is a Jewish holiday lasting eight days. It is typically celebrated in late fall or early winter. It begins at sundown on the 25th of Kislev, the ninth month of the Jewish year. In 2017, Hanukkah begins on Dec. 12 and continues until Dec. 20.

Hanukkah commemorates the victory by an outnumbered army of Jews over Greek invaders in the second century B.C., according to Chabad.org. It also celebrates a miracle that occurred during the cleansing and rededication of the temple in Jerusalem: although there was only enough oil to fuel the Menorah (a candelabra used in temple services) for one day, it burned for eight days and nights.

"Hanukkah is a … complicated holiday – it's not what people think it is," said J.D. Kleinke, an author, cantorial soloist and music director at Congregation Shir Tikvah in Portland, Oregon. "It is not our Christmas … it is not quite the happy simple story that we tell our children."

A brief history of Hanukkah

The story of Hanukkah dates back over 2,000 years to around the second century B.C., or the 3500s on the Jewish calendar. The land where Israel is now was part of the Seleucid Empire, which arose out of Alexander the Great's fractured empire after he died in 323 B.C. It stretched from modern-day Turkey through the Middle East all the way into northwest India. In 200 B.C., the king at the time, Antiochus III, won the land from Egypt and allowed the Jews to practice their way of life in peace. In 188 B.C., however, the Romans defeated Antiochus and annexed the land. And although they left Antiochus in charge, they required him to collect heavy taxes from the people, according to the Chabad.org.

After Antiochus III died in 187 B.C., his successors continued the oppression of Jewish culture and religion to an even greater extent. Some Jews accepted the Syrian-Greek way of life — including idol worshipping — and are called Hellenists.

A divide between the Jewish Hellenists and the Jews deepened, Kleinke said. In 168 B.C., the Hellenists had informed the king, Seleucus IV, that there were many riches within the temple treasury. The funds in the treasury were made up of contributions from all Jewish adults. The half a shekel contributed annually by each member of the temple was used for fixing and updating the building, taking care of orphans and funding sacrifices. Seleucus had his minister enter the temple with orders to take all the money, but the minister failed.

Soon after, Seleucus was killed, and his brother, Antiochus IV, took his place. He removed the high priest of the temple and replaced him with the priest's Hellenist brother. The brother not only increased Hellenist ways, but also shared the wealth with the king. Another high priest soon followed with promises of collecting even more money.

When rumors of Antiochus' demise in battle in Egypt reached the Jews, they rebelled and forced out the high priest and his followers. However, the rumors proved to be untrue, and when the king returned, he unleashed his army on the Jews as punishment. Thousands of Jews were killed. As further punishment, strict laws were enacted that prevented the Jews from worshipping and following their dietary laws and other customs. Any Jew found doing so faced the penalty of death.

A group of Jews known as the Maccabees (the name was formed from the first letters of a Hebrew phrase, "Mi Kamocha Ba'eilim Hashem," which translates to "Who is like You, God.") rebelled against the king's treatment. Led by Judah the Strong, the Maccabees defended themselves against an army of more than 40,000 soldiers. After many battles, the much smaller group of Maccabees defeated the army. They then returned to Jerusalem to reclaim their temple and rid it of the idols placed by the Hellenists. The temple was rededicated on the 25th of Kislev in the year 3622 (139 B.C.).

The Maccabees had a new menorah constructed, as the previous gold one had been stolen, and searched the temple for enough oil to light it. Only a small amount of oil was found, enough to light the menorah for a single day. But the light ended up burning for eight days, which is known as the miracle of Hanukkah.

The meaning of Hanukkah

The Hanukkah story essentially describes a culture war, Kleinke said. "It was us versus us," rather than us against the Greeks and Syrians, he said. The Hellenists were the Jews who had assimilated into the Greek culture, adopted some of the Greek ways of life and incorporated them into the Jewish culture. The group led by the Maccabees resisted any outside influences and were essentially fundamentalists. The Maccabees not only purged the Greeks, but their own countrymen.

Kleinke likens these events to those in the United States today where much of the population is involved in some sort of culture war and many are promoting a false narrative of a past that never existed. This is the view, according to Kleinke, that many take when looking back at what happened under the reign of the Greeks and Syrians.

"And that may be what the military victory really was: it was a victory of fundamentalist people over people who were enlightened people, who were in a different class, and that they were in cahoots with the Greeks."

Hanukkah is celebrated for eight days and eight nights. Celebrations begin when the sun sets on the 25th of Kislev, which typically occurs from late November through December. Each night as the sun sets, one branch of the Hanukkah menorah (also known as a chanukiah) is lit by the shamash, the "attendant" candle making up the ninth and typically tallest branch on the menorah, Kleinke said. One candle is lit on the first night, two on the second and so forth. Traditionally, candles are added and lit from right to left, although there is no one correct order in which to place and light the candles.

Prayers accompany each night's candle lighting. Three prayers are traditionally said or sung on the first night of Hanukkah and two prayers each of the following seven nights. Once the menorah is lit, it is often placed in a door or window that faces the street to share the light with neighbors. Traditional songs follow throughout the evening.

Food plays an important part in many Jewish traditions, and Hanukkah is no exception. Favorite Hanukkah foods include those fried in oil to commemorate the miracle, especially latkes (pancakes made with potatoes, onions, eggs, flour and seasonings), served with applesauce and sour cream, and sufganiyot (jelly-filled donuts that have been deep-fried in oil).

Some Hanukkah meals include cheese and other dairy products to honor Yehudit (Judith) whose homemade cheese played an important role in a military victory in 164 B.C., according to Chabad.org. She served her salty cheese to a Greek general, who quenched his thirst with so much wine that he passed out. Yehudit chopped off his head.

The dreidel (from a Yiddish word meaning "to spin") is also called in Hebrew a "sevivon" (meaning "to turn around"). It is used in a popular Hanukkah gambling game. The four-sided top has a different Hebrew letter on each side: nun (נ), gimel (ג), hei (ה)‎, and shin (ש). These letters stand for the phrase "nes gadol hayah sham," which translates to "a great miracle happened there." In Israel, the phrase is "nes gadol hayah po," which translates to "a great miracle happened here," and the shin is replaced with a pey (פ) on the dreidel.

Each player takes turns spinning the dreidel, and the letter the dreidel lands on represents an action, such as putting currency in the central pot, winning part or all of the pot, or doing nothing. Anything can be used for currency, such as pennies, nuts, chocolate coins or raisins.

Gifts are not a traditional part of Hanukkah, but children are traditionally given gelt, or money. There are several reasons for giving gelt, according to Chabad.org. One of them is to reward children for studying the Torah. This is a reminder to them that the Jewish people had to be re-educated about the Torah after the Greeks were defeated and the Hellenist ways overturned. The word Hanukkah comes from the word for "education." Children also receive gelt to remind them to give part of their money to charity.

Many, including Kleinke, see Hanukkah celebrations growing in popularity to reflect that it occurs so near to Christmas, and it helps those who are Jewish not feel as left out during Christmas celebrations.

While Hanukkah is a time for celebrating with family, friends and food, to many it is one of the many times over the year for rededicating or purifying themselves personally. The story of Hanukkah has been become a metaphor, according to Kleinke. "What does it mean to have the miracle of the lights, that we took the temple back, purified the temple … that impurity and the contamination can be just bad thoughts, bad behaviors, things we are ashamed of, things we are not proud of. And Hanukkah is a time to really reflect on that."