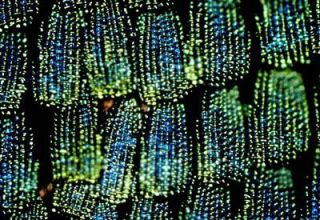 The bright green wings of the butterfly (P. blumei) result from the mixing of the different colors of light that are reflected from different regions of the scales found on the wings of these butterflies.
(Image: © Mathias Kolle, University of Cambridge.)

Scientists have reproduced the brilliant optical effect of tropical butterfly wings. The advance could lower bank fraud by leading to improved security in the printing of paper money.

The butterfly effect could be used to encrypt information on money or other valuable items and reduce forgery.

"The shiny green patches on this tropical butterfly's wing scales are a stunning example of nature's ingenuity in optical design," said researcher Mathias Kolle of the University of Cambridge. "Seen with the right optical equipment these patches appear bright blue, but with the naked eye they appear green."

Replicating the vivid, changeable colors on butterflies and other insects had stumped scientists in part because the effect doesn't come from pigments but rather as a result of light bouncing off microscopic structures on the insects' wings.

To figure out this visual ability, Kolle and colleagues studied the Indonesian Peacock or Swallowtail butterfly (Papilio blumei), whose wing scales are made of tiny, intricate structures that resemble the inside of an egg carton.

Using artificial materials and special nano-techniques, the team created surfaces that were identical to those on the Swallowtail's wings, and the look-alikes produced the same vivid colors.

Likening the advance to unlocking "one of nature's secrets," Kolle speculated that the ability to show as two colors simultaneously could be an important evolved trait for butterflies.

"If [a butterfly's] eyes see fellow butterflies as bright blue, while predators only see green patches in a green tropical environment, then it can hide from predators at the same time as remaining visible to members of its own species."

Now, scientists will be able to take this self-encryption-through-iridescence effect to the paper surfaces of bank money and lessen forgery.

"These artificial structures could be used to encrypt information in optical signatures on banknotes or other valuable items to protect them against forgery," Kolle said. "We still need to refine our system but in future we could see structures based on butterflies wings shining from a £10 note or even our passports."

The results were published last week in the journal Nature Nanotechnology.