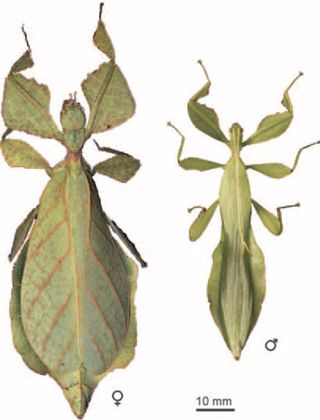 A fossil of a leaf-imitating insect from 47 million years ago bears a striking resemblance to the mimickers of today.

The discovery represents the first fossil of a leaf insect (Eophyllium messelensis), and also shows that leaf imitation is an ancient and successful evolutionary strategy that has been conserved over a relatively long period of time.

Scientists led by Sonja Wedmann of the Institute of Paleontology in Bonn, Germany, unearthed the remains at a well-known fossil site called Messel, in Hessen, Germany.

The 2.4-inch-long insect had physical characteristics similar to the oblong leaves of trees living there at the time, including Myrtle trees, legumes, such as alfalfa, and Laurel trees.

It also shared features with modern insect relatives in size, shape, and the designs used for camouflage. For instance, the fossil had foliage-like extensions from its abdomen.

During the day to hide from overhead predators, a leaf insect can stay still for long periods of time, tucking its head into its body to strengthen the leafy appearance. The fossil insect apparently did the same, as the scientists found its fore legs were curved and formed a notch where the insect's head could be inserted.

At night, when the nocturnal insects are active they rock back and forth like a leaf fluttering in the wind.

The cryptic appearance has changed little since the Eocene times, suggested the researchers in this week's issue of the Proceedings of the National Academy of Sciences.