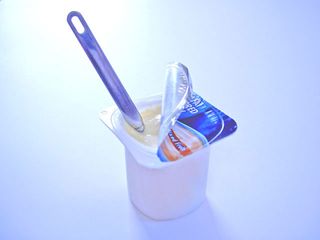 Strepptococcus mutans, or S. Mutans, is a bacterium that causes tooth decay. S. Mutans sticks to the surface of teeth, producing an aggressive acid that breaks down the enamel.

The bacteria found in yogurt might come to the rescue. In the journal Chemistry & Industry, scientists report that a new strain of lactobacillus called L. anti-caries, forces S. Mutans to clump together, preventing them from becoming attached to the tooth surface.

Tests reveal that the chewing gum can reduce the amount of bacteria in the mouth fifty times, the scientists report.

Chewing gum based on the product is being developed by the German chemical company BASF. Mouthwash and toothpastes using the bacteria are also being developed.

Stefan Marcinowski, executive director of research at BASF, said a product based on the bacteria would be available in 2007.

The good bacteria might also be used in new deodorants. Strains of the bacteria have been found to cut down on odor-producing bacteria that dwell in underarms and feet.