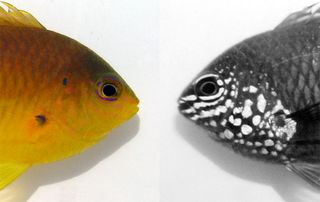 Damselfish (left) can distinguish between other fish by looking at the ultraviolet patterns on their faces (right).
(Image: © Ulrike Siebeck/University of Queensland.)

While we might use eye color and hairstyle to tell people apart, some fish species rely on ultraviolet light patterns of faces to distinguish one species from another, a new study finds.

Scientists have long known some animals have UV vision, with the ability to see those wavelengths on the electromagnetic spectrum that are shorter than visible light. But they hadn't realized just how savvy some of these ultraviolet peepers were. (Humans are essentially colorblind in UV.)

The researchers studied two species of damselfish, which are small, aggressive fish that would look identical to us. They placed a male fish from each species, Ambon damselfish (Pomacentrus amboinensis) and lemon damselfish (P. moluccensis), into plastic tubes and presented these to a territory owner, a male Ambon damselfish, in its natural reef habitat.

Twenty-two of the 28 territory owners preferred to attack intruders from their own species rather than the foreigners. When the experiment was run with UV filters so the fish couldn't see the UV facial patterns, this same preference for attacking kin wasn't found.

It makes sense they would attack one of their own. "The highest level of competition is expected from members of the own species," said Ulrike Siebeck of the University of Queensland in Australia.

The results held even though individual fish within each species showed slightly different UV patterns. And so there seems to be an overall pattern the fish use to pick out one species from another, Siebeck figures.

For instance, the lemon damselfish showed more UV reflective "spots," but on average each of these components had a smaller area than those found in Ambon damselfish.

"We don’t know yet which features are used by the fish but these results show that it is possible to find systematic differences between the two species," Siebeck said.

Siebeck suspects the fish might use these individual differences to tell apart one fish from the group even within the same species.

"The individual differences could code for all sorts of things that might be useful information for the fish – fitness, hierarchical status, maybe willingness to fight," Siebeck told LiveScience. "We are testing this at the moment … and so far it is looking good."

The results will be published in the March 9 issue of the journal Current Biology.