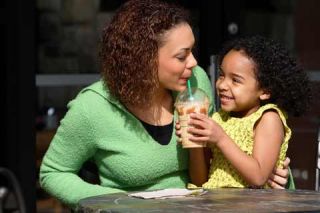 Children who were securely attached to Mom at age three showed more open emotional communication with mothers and better language ability later. And they did better with peers. Image
(Image: © Dreamstime)

The act of mothering may trigger the development of maternal neurons, at least in rats, according to a new study.

The mommy neurons could help a nurturer to recognize her little ones, though the scientists aren't sure of their function. And the rats didn't have to be pregnant or have ever nursed an infant to get the neuron boost. They just had to show motherly behaviors.

Rat brains are thought to be good analogues of the human brain for research like this.

In the study, virgin rats were exposed to foster pups each day until they began to exhibit maternal behavior, including crouching over the young, grouping them, or carrying them back to the nest. The researchers found that the virgin rats exposed to pups had increased numbers of new neurons.

Previous studies have suggested interacting with young can stimulate maternal behavior in many animals, including mice, hamsters, monkeys and even humans. Rodents that are pregnant or lactating have also been shown to have increased formation of neurons. But this study was the first to look at neuron growth in virgin animals exhibiting maternal behavior.

The study focused on a specific part of the brain, called the subventricular region, which is involved in the production of cells that affect odor recognition, and possibly recognition of young. Virgin adult rats that behaved maternally were found to have more neurons in this region compared with rats that had never interacted with pups. Also, the nurturing rats had more neurons in this region than rats that had been exposed to young but didn't act maternally, suggesting such neurons are linked with maternal behaviors.

The scientists still don't know what triggers the increased production of new neurons in the virgin rats. One possibility is that the hormone prolactin, which stimulates the onset of maternal behavior and the formation of neurons during pregnancy, may play a role. Additionally, exposure to the pups themselves could promote the production of more neurons in the virgin rats.

The findings raise many questions that the scientists plan to investigate in future studies, said Robert Bridges, a researcher at Tufts University’s Cummings School of Veterinary Medicine. For instance, "Where do these new cells migrate to within the brain and what do they do?" Bridges said; and "Do they affect how a female subsequently perceives her young through recognition of baby odors?"

The study was published in the Dec. 16 issue of the journal Brain Research Bulletin, and funded by a National Institutes of Health grant.