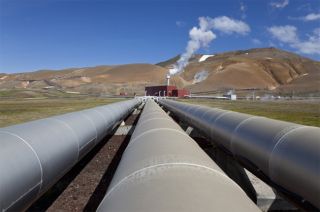 Loads of heat energy is trapped underground, as erupting volcanoes and geysers show. Geothermal energy plants, like those in Iceland (shown here), use this heat to generate electricity.
(Image: © Stockxpert.)

One such enhanced geothermal system, as they are known, caused a magnitude 3.4 quake in Basel, Switzerland, in 2006. A case in court against the head of the firm behind the work, Markus Häring of Geothermal Explorer, started yesterday on charges of property damage.

Meanwhile, a company running a federally funded enhanced geothermal system in California, AltaRock Energy, declared Dec. 11 it was abandoning the project, just one day after Switzerland permanently shut down the Basel system.

Power just beneath your feet

An extraordinary amount of heat is trapped underground, as erupting volcanoes show. Geothermal energy uses this heat to generate electricity and warm up buildings and roads.

"There is a virtually unlimited source of power just below your feet," said Domenico Giardini, director of the Swiss Seismological Service in Zurich.

Conventional geothermal energy taps into energy near the surface. Enhanced geothermal systems, on the other hand, drill more than a mile down to access hot dry rock or magma, and pressurized fluid is pumped in to generate steam that can drive turbines. Scientists note the technology remains a promising source of alternative energy, but caution that its risks need more research and open discussion so that people and authorities don't overreact.

"The energy is there — we just have to be smarter about getting it," Giardini said.

These systems could lead to a 40-fold increase over present geothermal power generating capacity, according to the U.S. Department of Energy. An expert panel that convened at MIT in 2006 estimated the setups could provide up to 100,000 megawatts of electricity in the United States by 2050, or some 10 percent of the current national capacity.

The drawback of enhanced geothermal systems is the fact that they can trigger earthquakes. The pressurized water forced into the rock generates micro-earthquakes. It can also interact with existing deep faults, potentially causing larger temblors.

That is precisely what happened in Basel. The city has a history of earthquakes — in 1356, the city was severely damaged by a magnitude 6.7 quake, the largest ever recorded in central Europe, Giardini noted in a commentary that will be published in the Dec. 17 issue of the journal Nature.

"Basel was probably one of the worst places one could have started from," Giardini said. "Enhanced geothermal systems in the future probably should not focus on cities with a past of devastating earthquakes."

Giardini noted the Swiss Seismological Service had not seen what it would have considered adequate seismic risk analysis for the project.

"There wasn't an expert assessment of how much the seismicity induced by the project would connect with the natural seismicity under Basel," he explained. Moreover, although insurance covered any damage covered by large-scale collapses, "it didn't account for little things like cracks in the plaster, which you have to call in painters for. If you call them in for 10,000 buildings, that costs a lot of money."

A number of other enhanced geothermal systems are active in Europe, some of which have been linked with earthquakes.

At two megawatts, the European Hot Dry Rock geothermal energy project in France will be the largest commercial enhanced geothermal system in operation. It was linked with magnitude 2.9 activity, but was adapted to reduce quake risk, and is scheduled to begin generating electricity in January. The work there is carried out in a more rural area without a known history of large earthquakes.

"My personal feeling is that enhanced geothermal systems will remain successful if they do not go directly under cities and if there is good dialogue with the public when it comes to assessing risks," Giardini said. "We're used to living with risks with energy systems — dams can break, and oil and gas can contribute to global warming. There is certainly a future for enhanced geothermal systems — it's just a matter of getting the energy out in a safe way."