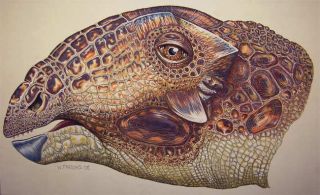 A husband and wife team of paleontologists has discovered a newfound species of armored dinosaur that lived 112 million years ago in what is now Montana.

The duo, Bill and Kris Parsons of the Buffalo Museum of Science in New York, spotted the dinosaur's skull on the surface of a hillside in Montana in 1997. Over the next few years, they retrieved more of the now nearly complete skull along with skin plates, rib fragments, a vertebra and a possible limb bone from the dinosaur species.

Now called Tatankacephalus cooneyorum, the beast is a type of ankylosaur, or a group of plant-eating dinosaurs that resembled nature's armored tanks as they walked about on four limbs and their bodies were covered with bony armor that may have been covered with a colorful keratinous sheathing (same as the stuff in bird beaks and turtle shells).

"These were big dinosaur versions of a Sherman tank," Bill Parsons said. "They were armored and they withstood whatever came at them, and they just kept going." T. cooneyorum was about 15 to 20 feet (4.5 to 6 meters) in length.

And this dinosaur had its share of protection, with two sets of stubby horns, one on the cheeks and the other around its eyes, two thick domes at the back of the skull and thickened areas around the nasal region.

Bill Parsons suspects T. cooneyorum was covered with hundreds or even thousands of bony plates equipped with spikes and a tail tipped with a club, similar to other ankylosaurs. Such protection, along with a swinging clubbed tail, would have kept at bay any of the small dinosaurs around at the time, Parsons said.

To stay safe from the bigger brutes around, the ankylosaur may have flattened its body on the ground and pulled in its head, where head horns could protect the animal from a nasty neck bite, Parsons said.

But say a giant meat-eating dinosaur did pick a fight? Since carnivores like Acrocanthosaurus were bipedal, a hit to a single leg could do them in, the researchers suspect.

"If you hit a tyrannosaur or any big meat-eater in the knee or leg and you cripple one leg with the hit of a tail club, I have a feeling it has a few minutes before it topples over and its friends start eating it," Bill Parsons told LiveScience.

The skull represents a transitional evolutionary form between the more primitive ankylosaurs and the later ankylosaurs that had much larger horns and a nasal area that was highly curved. T. cooneyorum had small horns and a slightly curved nose.

"For years, Bill and Kris have been collecting fossils from a critical time in Earth's history, and their hard work has paid off," said Lawrence Witmer, a paleontologist at Ohio University who was not involved with this study. "This is a really important find and gives us a clearer view of the evolution of armored dinosaurs."

The dinosaur is described in the Canadian Journal of Earth Sciences.