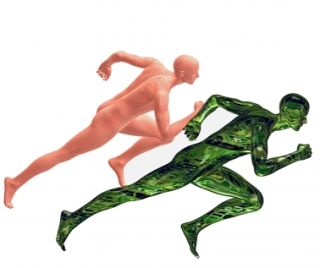 When President Barack Obama said in his weekly radio address Saturday that innovation would be a key to the future of the nation, he probably was not thinking specifically of artificial brains or replacement eyeballs.

But other researchers already have such goals in mind and are well on their way to building Humans 2.0, the real-life Steve Austin of the "Six Million Dollar Man."

Recent breakthroughs in bionics and lab-grown body parts — along with news last month that a Swiss research team aims to recreate the intricacies of the human brain within a decade — show science is rapidly creating many of the parts needed to build a fully functional human almost from scratch.

While the ultimate goal remains years if not decades away, and some aspects may be ethically questionable, the work is already helping people live more bearable and productive lives.

Prostheses have a history going back to at least 3500 B.C., when an Indian poem made mention of an iron leg made for an amputee warrior. A fake toe crafted of wood and leather has been dated to around 1069 to 664 B.C. in Egypt.

Prosthetic arms, legs, hands and feet have come a long way since then, their scientific advancement fueled in large part by the devastating wars of the 20th century.

Today, replacement knees and hips are routine. And prostheses designed with "artificial intelligence" mimicking natural muscle function are in early release to select testers, and even more sophisticated neurosensing limbs are in development. In other words, you think and it does.

One key to a working bionic limb, of course, is the brain interface, a hurdle rapidly being overcome: University of Wisconsin-Madison student-researcher Adam Wilson recently created Twitter messages using nothing but his brain waves, and even as far back as 2006 a brain-computer interface allowed a paralyzed man to play a computer game with only his thoughts.

Products hitting the market that combine all these technologies are remarkable. A hydraulic hand developed in Scotland and on sale in several countries is so functional users say they can type with it.

The heart and other organs

An 800th patient has recently been implanted with the world's only "total artificial heart," (TAH) meant to act as a bridge for victims of morbid heart disease on the waiting list for a transplant.

Unlike a pacemaker, which helps a malfunctioning heart to beat properly, the revolutionary device approved in 2004 can completely replace an individual's heart for up to a few months. Fifty years after its first crude archetypes kept a dog alive for 90 minutes, scientists expect that tweaks to the TAH-t (t for temporary) could spawn the development of a permanent artificial ticker in just another few years.

Meanwhile, the first prototype of an artificial liver was grown in a lab in 2005. UCLA researchers are working on a wearable artificial kidney. Scientists at the Juvenile Diabetes Research Foundation expect to have a portable pancreas on the market in a few years.

Victims of severe burns have benefited from recent advances in the production of artificial skin which, just like the real thing, protects exposed dermis from infection while body regenerates new layers.

Before synthetic skin, first developed in the 1980s, grafts from the patient's own body or from a cadaver were used to cover wounds, but the process was painful and infection or rejection common. The synthetic stuff, on the other hand, combines collagen with some human skin cells in a lab, then is applied to the wound as a kind of scaffolding to encourage real skin growth.

A German lab recently developed a way to mass-produce the artificial skin, making it more cost-effective, while others are tinkering with the idea of adding powerful antibacterial properties to the cultured cells.

In 2006 muscle and bone were printed with bio-ink with a goal of growing real replacement tissue that could be cultured in a lab and then injected into patients. Even stem cells have been printed, promising a path to growing whole organs one day. Other researchers are developing ways to cultivate bone cells on scaffolds built of carbon nanotubes.

Researchers just this year grew real blood vessels from skin cells. Meanwhile, a program at the University of Pennsylvania is working on artificial cells made of polymers that could mimic white blood cells.

It's a testament to the complexity of the human eyeball that, 5,000 years after a Persian priestess wore a golden eye to replace the one she lost, little has changed in the science of artificial eyes except for what they're made of.

One bionics approach is already helping the blind see, however. A camera built into a pair of glasses sends signals to a tiny chip implanted in the back of the retina — an artificial retina — stimulating nerves that lead to the vision center of the brain.

Still, visual prostheses are overwhelmingly used to copycat the look of an eye, not its function. Despite the popular term, most "glass eyes" haven't been made of the fragile material since World War II, when a shortage of glass and abundance of injuries necessitated the switch to plastic.

The Holy Grail of artificial body parts is the brain, the convoluted workings of which science is just beginning to unravel.

Though medical experts are seemingly light-years away from successfully implanting an artificial brain into a human, a fake – computerized – noggin might become reality within a decade, according to a recent statement by researchers. The Blue Brain project, based in Switzerland, is currently reverse-engineering the human brain within a supercomputer, in the hopes of creating an accurate simulation of our neurofunction. The group has already simulated elements of a rat brain.

Other researchers are unlocking secrets of the brain that could allow for biochips that replace certain functions, at least. The sex chip, for example, is nearing readiness and would stimulate orgasms at the push of a button.

"It is not impossible to build a human brain and we can do it in 10 years," Henry Markram, who leads the Blue Brain project, told the BBC.

Editor's Note: This article is the first in a series this week about the history and future of innovation in science and technology that makes life better and more productive.