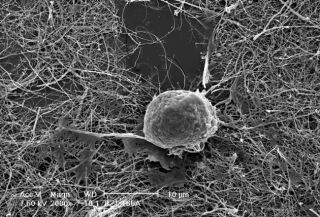 Bone cells (in the center) grow on a substrate of carbon nanotubes.
(Image: © U.C. California, Riverside)

Scientists have developed a technique that someday may let doctors create customized bones.

Such bones could come in handy in those circumstances in which chunks of bone in the human body go missing. Bones can be lost, for example, in brutal accidents, from in-depth dentistry, or during surgery, especially when certain kinds of tumors are removed.

Bone grafts can help span a gap, but current sources of fill-in bone are less than perfect.

Bone can be swiped from someplace else on the patient—and home-grown bone is the stuff that the body is least likely to reject—but that means an extra incision, extra pain, and extra risk of complications. Bone from cadavers is sometimes used, but imported bone doesn't grow as well as the domestic model. And artificial bones from materials such as ceramics aren't good for much more than extending natural bone grafts.

Perhaps the ideal solution, says Laura Zanello, an assistant biochemistry professor at the University of California in Riverside, would be a substitute bone fragment that matched the gap and the patient perfectly.

Now her group has developed a system in which bone cells grow onto scaffolds built of carbon nanotubes, which are extraordinarily strong and stiff structures usually no more than a few nanometers in diameter. Currently the group is using bone cells from lab rats.

The idea is that when the technique is refined, the nanotubes could be formed so that when layered with the patient's bone cells they would to fit perfectly into a gap in a damaged bone. Over time the bone cells would merge with the surrounding bone, just like a conventional graft. The body would be unlikely to reject such a contraption, she says, because carbon is bio-friendly and the bone would be grown from the patient's own cells.

Many other researchers have attempted to combine carbon nanotubes with various types of living cells, Zanello says, but until recently the cells have died quickly, poisoned by the tubes themselves.

"What happens," she said, "is during the fabrication of carbon nanotubes, there is deposition of heavy metals into the nanotubes." These metals are toxic to most living cells. But a member of Zanello's group—Bin Zhao, then a graduate student in the university's chemistry department and now a researcher at Oak Ridge National Laboratory—produced nanotubes that are purer than previous models.

"Apparently that is the reason our bone cells can grow on these carbon nanotubes," Zanello said. "The most fascinating part was that they will not only grow and proliferate, but they secrete a bone matrix."

Such a matrix would allow the cells to fuse with existing bone.

The research was detailed in a recent issue of the journal Nano Letters.

Although these results are promising, they are just the first step in a long journey toward treating damaged human bones, Zanello cautions. Especially important will be to test how well the body tolerates the nanotube structures, which, although buried in bone, would be permanent.