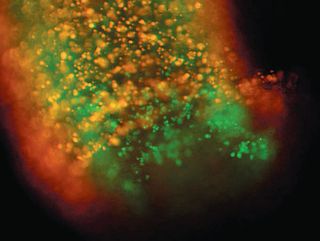 The creation of implantable human organs with an ink-jet printer isn't as far-fetched as it might seem, a materials scientist said—at least in the future.

Scientists already use ink-jet cartridges to "print" stem cells into exacting patterns, and now engineers are taking the technology to a whole new dimension—quite literally—by exploring ways to print 3-D structures of cells.

"It's a milestone that we can print all types of cells onto a surface with an ink-jet printer without them dying, even stem cells," said Paul Calvert, a materials scientist at the University of Massachusetts Dartmouth. "Doing this successfully in three dimensions, however, is like going from a black-and-white to a full-color."

Calvert, who details the state of cell-printing research in the Oct. 12 issue of the journal Science, said 3-D techniques could help unravel the mysteries of cell-to-cell communication and, perhaps in the distant future, manufacture human organs from scratch.

To build cell-printing machines, Calvert said he walks into electronics stores, buys an ink-jet printer cartridge and fits it onto a software-controlled robot back at his lab.

"What you see is a familiar cartridge sitting in the middle of this machine," Calvert told LiveScience. But instead of controlling differently colored inks, however, Calvert said the machine controls different cultures of cells fed into the cartridge nozzle.

In spite of the fact that ink-jet cartridges use a tiny boiling plate to spit out tiny droplets of ink, Calvert said that cell cultures aren't harmed during the process.

"The heating duration is too short," he said, noting that about 99 percent of cells come through the process fine. "The cells are about three-quarters smaller than the opening, so they can survive being shot out of an ink-jet cartridge."

Calvert's team and others are building on the success by depositing cells in a thin layer, covering it with a thin membrane and then printing more cells on top. The membrane, he explained, acts like porous scaffolding on which cell layers are separated, but can still communicate.

"When cells are near one another, we know they talk, but we don't know what they're saying," he explained. "If you break a bone, for example, cells are recruited to help. Yet they make new bone instead of something else, so there's a lot of communication going on."

Calvert explained that layered, printed cells can be controlled in very precise ways, potentially allowing researchers to decode cellular language and find out what types of cells need to be present to produce tissues such as skin or heart muscle.

Eventually, Calvert hopes the technique will print out miniature organs for medical tests such as drug toxicity. Much further in the future, he hopes—but does not expect—to see implantable human organs printed out on demand.

"But I've seen so many good ideas turned to grief," he cautioned. "What's often expected to perform flawlessly turns out not to, so it's quite far off."