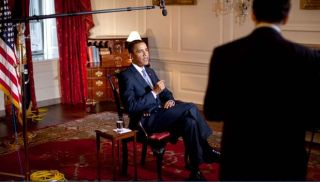 In his weekly radio address Aug. 1, 2009, President Obama said the nation's future depends on "investing in the research and development that will produce the technologies of the future — which in turn will help create the industries and jobs of the future."

In another nod to the value of basic science and technology research, President Obama in his weekly radio address today said long–term investments in innovation are needed to ensure the country's long-term economic growth.

The recession is easing, Obama said. But recovery will be slow, and he called for "a new foundation strong enough to withstand future economic storms and support lasting prosperity."

That foundation would be built through innovation, the president said.

"We need to recapture the spirit of innovation that has always moved America forward," he said.

"That means once again having the best-educated, highest skilled workforce in the world," Obama said. "That means a health care system that makes it possible for entrepreneurs to innovate and businesses to compete without being saddled with skyrocketing insurance costs. That means leading the world in building a new clean energy economy with the potential to unleash a wave of innovation – and economic growth – while ending our dependence on foreign oil. And that means investing in the research and development that will produce the technologies of the future — which in turn will help create the industries and jobs of the future."

{{ video="LS_090803_obama-tech" title="Watch the President's Speech" caption="In another nod to the value of science and technology, the president in his weekly radio address Aug. 1 said long-term investments in innovation arernneeded to ensure the country's long-term economic growth. Credit: Whitehouse.gov" }}

But as deficits soar and unemployment climbs, pitching anything beyond immediate stimulus programs is a tough sell to Congress and the public.

Yes, the Economic Recovery Act (the stimulus bill) put an additional $3 billion into the coffers of the National Science Foundation this year. But another $3 billion is apparently being poured into the questionable "Cash for Clunkers" campaign that has boosted vehicle sales immediately, whether those sales involve the Prius or mostly borderline-qualifying, gas-guzzling SUVs. (A self-selecting online LiveScience poll found 34 percent of 520 respondents think the idea is lousy, while another 32 percent think the free market should dictate auto sales.)

Many analysts, including the president, have warned that the United States is losing its leadership roll in science and technology. Some blame the situation on morality-based politics of the past administration. Whatever, experts agree that U.S. government spending on sci-tech has slipped, and that our education system is not preparing the researchers of the future to take leading roles. Over the next decade, schools will need 200,000 or more new teachers in science and math, according to estimates cited by the Christian Science Monitor.

Many fear that China or another country will use their own increasing technological prowess to become the next superpower.

Obama has made science and technology a central theme of his recovery plan for months now. In April, he declared investment in science research more essential than ever in calling for a commitment larger than any in U.S. history.

"Science is more essential for our prosperity, our security, our health, our environment, and our quality of life than it has ever been," he said as the swine flu outbreak took hold.

Obama also said in April that the United States is falling behind other nations and that we must commit to an unprecedented level of federal investment in the sciences, including raw research and higher standards of education.

"Federal funding in the physical sciences as a portion of our gross domestic product has fallen by nearly half over the past quarter century," the president said in April. "Time and again we've allowed the research and experimentation tax credit, which helps businesses grow and innovate, to lapse.

In a self-selecting online LiveScience poll in April, 95 percent of 323 respondents agreed that Obama's plan for heavy investment in basic science was critical to the nation's future. While that poll is not scientific, it reflects the sentiment at least among a subgroup of people who read about the topic on a science site.

Obama's commitment to science goes back to his campaign and his been strong since.

"We will restore science to its rightful place, and wield technology's wonders to raise health care's quality and lower its cost," he said during his inauguration. "We will harness the sun and the winds and the soil to fuel our cars and run our factories. And we will transform our schools and colleges and universities to meet the demands of a new age. All this we can do. And all this we will do."

But analysts recognize the challenges of making heavy investments in basic research during such tough economic times. They also recognize its importance.

"In so many foreign policy issues today, there is a scientific or technical element of some kind — whether it is global health, proliferation of nuclear weapons, the environment, global warming, or many other issues," says Norman Neureiter, the director of the Center for Science, Technology and Security Policy. "Science is only one element of any complex policy decision, but I strongly believe that a decision made in awareness of the relevant scientific facts will turn out to be better than one which ignores them."

The president will discuss the idea of innovation as a cornerstone to economic prosperity in more detail on Wednesday in Elkhart County, Indiana, an area hard-hit by the recession.

The question that remains is whether Congress and the American people have the stomach for significant additional investment in basic science and technology research now, when it's most needed, before the nation loses its role not just as the world leader in innovation, but as the so-called superpower.