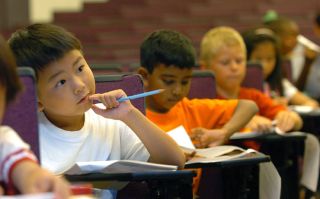 In recent years, many researchers have cautioned that the United States is losing its global leadership role in science and technology due to a lack of federal funding and morality-based politics, leaving the door open for China and others to peck away at becoming the next superpower.

Many also bemoan the general lack of science literacy in this country and the lack of young people pursuing careers in science.

Now you can add to the equation a shortage of science and math teachers.

Over the next decade, schools will need 200,000 or more new teachers in science and math, according to estimates cited by the Christian Science Monitor. Yet many school districts already face shortages. In at least 10 states, fewer than 60 percent of middle-school science teachers are certified for what they do, the Monitor reports.

There is hope among scientists and educators that President-elect Barack Obama will change the course. The hope is based on the lofty goals Obama laid out recently in announcing his new team of science advisers. "The highest purpose of science is the search for knowledge, truth and a greater understanding of the world around us," he said, in promising to protect free and open inquiry.

Obama plans to use scholarships to draw teachers to high-needs schools, with emphasis on science and math teaching.

The president-elect has also pledged to modernize school buildings and update classrooms with computers. "It is unacceptable that the United States ranks 15th in the world in broadband adoption," he has said. "Here, in the country that invented the Internet, every child should have the chance to get online."

The pledge has excited Donald G. Knezek, chief executive officer of the Washington-based International Society for Technology in Education.

"We are celebrating the election of our first president who truly understands and embraces information and communication technology, connectivity and the power of the World Wide Web, and the democratization of information, knowledge, and 21st-century communications," Knezek is quoted as saying by Education Week. "The most important priorities for the U.S. — to regain a leadership role globally in education, to overcome the recent slippage among nations we've seen in almost every important statistic of international educational comparisons — are already on President-Elect Obama's radar."

Progress, if it comes, can be measured.

The global Trends in International Mathematics and Science Study (TIMSS) compares students around the world. The most recent version, for 2007, was released this month: