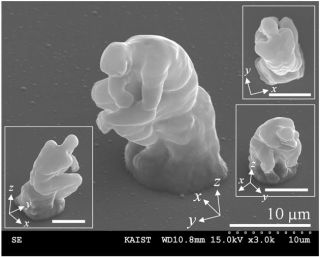 A microscopic version of Rodin's famed sculpture "The Thinker" is just about twice the size of a red blood cell at 20 millionths of a meter high.
(Image: © Dong-Yol Yang et al., Applied Physics Letters)

Using lasers, Korean researchers have crafted a microscopic version of Rodin's famed sculpture "The Thinker" just about twice the size of a red blood cell at 20 millionths of a meter high [image].

Muscles and even toes are visible in the tiny model.

The new technique could help develop novel biosensors and other complicated microscopic devices, the scientists said.

For more than a decade, researchers worldwide have experimented with lasers to fabricate elaborate 3-D creations. They start with a resin that hardens when exposed to certain frequencies of light. Using overlapping beams of lasers, researchers can then solidify a sculpture with details measuring less than a wavelength of visible light in size.

These sculptures can by made stronger by increasing the power of the laser beams or leaving the beams on longer. This makes each spot on the surface of these sculptures extend deeper, yielding a thicker skin. Unfortunately, each spot now also takes up more surface area, sacrificing detail.

To solve this problem mechanical engineer Dong-Yol Yang at the Korea Advanced Institute of Science and Technology in Daejeon, South Korea, and his colleagues use multiple laser beams focused at and below each spot on the surface of thea sculpture [graphic]. The result is a thicker skin without each spot taking up more surface area.

With this new approach, the scientists scanned a replica of Rodin's popular masterpiece "The Thinker," originally sculpted in 1880, and created a version 93,000 times smaller than the roughly 6-foot-high original.

Yang and his colleagues reported their findings online Jan. 4 via the journal Applied Physics Letters.