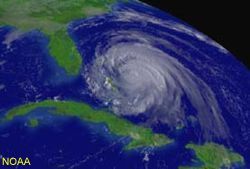 Deadly Hurricanes of 2004 Will Save Lives

Before the 2005 hurricane season is done, you might read about Hurricane Alpha.

Each year, 21 common names are reserved for Atlantic Basin hurricanes, with the list arranged alphabetically and skipping certain letters. Rita is the 17th named storm in the Atlantic Basin this year. There are only four left.

So what will officials do after tropical storm Wilma develops, assuming it does?

"We go to the Greek alphabet," said Frank Lepore, spokesman for the National Hurricane Center.

This gives the World Meteorological Organization (WMO), the United Nations agency responsible for choosing hurricane names, 24 more names to work with, from Alpha to Omega, and including such names as Omicron and Upsilon.

This season started out as the busiest ever, with 4 named storms by July 5. It never really let up.

"The August update to Atlantic hurricane season outlook called for 18 to 21, so I would hope it doesn't go any higher than that, but it's a possibility," Lepore said.

The naming of Hurricanes has a long and interesting history. For many centuries, hurricanes in the West Indies were named after particular Catholic saint's days on which they occurred. Hurricane "San Felipe" struck Puerto Rico on September 13, 1876. When another hurricane struck Puerto Rico on the same day more than fifty years later, it was christianed "San Felipe the second."

Military weather forecasters began giving women's names to significant storms during WWII, then in 1950 the WMO agreed to an alphabetical naming system, using the military's radio code. The first named Atlantic hurricane was Able in 1950.

Officials soon realized the naming convention would cause problems in the history books if more than one powerful Hurricane Able made landfall. So, in 1953 the organization adopted a rotating series of women's names, planning to retire names of significant storms.

Feminists urged the WMO to add men's names, which was done in 1979. The boy-girl-boy-girl naming convention evolved to include French and Spanish names in the Atlantic system, reflecting the languages of the nations affected by Carribean hurricanes.

The twenty-one names reserved each year (the letters q, u, x, y and z are not used) are recycled every six years, minus those retired (such as Hugo and Andrew and, you can bet, Katrina). When a name is retired, the WMO chooses a new name to replace it.

The year with the most documented tropical storms was 1933, when there were 21 in the Atlantic Basin, but this was before hurricanes were routinely named. Activity is known to wax and wane in cycles that last decades. But some studies have suggested that global warming may be causing increases in hurricane intensity and frequency. Many scientists are skeptical.

The science of monster storms.