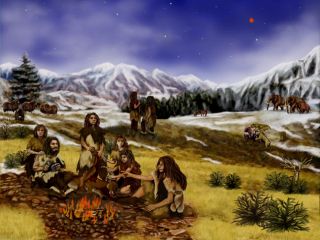 Those who investigate Neanderthal remains have long known of a puzzling gap — elderly individuals are rare. Scientists have thus suggested that these prehistoric humans might have had an inherently shorter life expectancy than us modern humans, with our lineage ultimately outnumbering theirs, and so contributing to their demise.

Not so, according to a new study. Our once closest living relatives likely had similar life spans as us.

Our species, Homo sapiens, is the only surviving lineage of the genus Homo. Still, there once were many others, all of whom could also be called human.

Anthropologist Erik Trinkaus at Washington University in St. Louis analyzed fossil records to gauge the adult life spans of Neanderthals and early modern humans, which coexisted in different regions for about 150,000 years. He found roughly the same number of 20- to 40-year-old adults and adults older than 40 in both Neanderthal and early modern human populations, suggesting life expectancy was probably the same for both.

"Arguments for longer survival among early modern humans causing the demise of the Neandertals have no basis in fact," Trinkaus told LiveScience. (Neanderthals are also called Neandertals due to changes in the German spelling over the years.)

Trinkaus did caution that a number of factors might skew his life-expectancy calculations. For instance, all these archaic and modern humans apparently had very mobile lifestyles during the Pleistocene to search for their next meals. That likely means any older members who could not keep up were left behind to die, and their remains would have been scattered by scavengers and lost from the fossil record. [Bones Reveal Grisly Clues to Neanderthal Life]

Still, "new fossil discoveries could change the pattern some, but it is unlikely to alter it very much," Trinkaus said. Overall, he contends that longevity did not factor into the extinction of Neanderthals. If early modern humans did have a population advantage, he argued, it was probably more due to high fertility rates and lower infant mortality.

Trinkaus detailed his findings online Jan. 10 in the Proceedings of the National Academy of Sciences.