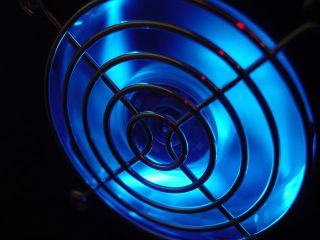 Photo taken by Allyson Lang (skallyson). There are no usage restrictions for this photo

Temperatures are reaching triple digits across the country and air conditioners are working overtime. They are also injecting additional carbon into the air, a gas known to insulate the planet and contribute to global warming.

A new analysis suggests the cycle will be exacerbated.

Earth's temperature has increased by about 1 degree Fahrenheit (0.56 degrees Celsius) in the last century. Studies strongly suggest that the increase is due to increased volumes of carbon dioxide and other greenhouse gases released by the burning of fossil fuels. Scientists predict the trend will continue and we'll also see more severe weather such as extreme heat in the future.

The temperature changes associated with the new bouts of extreme weather will require more energy for cooling buildings, the scientists said today.

The researchers simulated how temperatures will fluctuate across the United States in response to global warming and found that energy requirements will increase in the southern and western regions of the country as people turn on their air conditions to find relief from the scorching heat.

"The AC in my office is at full blast right now [and] that requires a lot of energy," said T. J. Blasing, a researcher at Oak Ridge National Laboratory in Tennessee where temperatures are reaching the 90s today.

However, Blasing and colleagues also found that the northern parts of the country will use less energy by 2025 because those regions will actually require less heating in winter.

Heating is often provided by natural gas, which is a very efficient process.

"You burn the gas, you get heat," Blasing told LiveScience. "When you generate electricity, you waste two-thirds of the heat produced."

Air conditioners are run on electricity. And most electricity is generated at coal-fired power plants.

"You have to burn a lot of coal to keep me cool," Blasing said.

The simulated carbon emissions attributed to AC usage accounts for less than half a percent of the nation's total. However, on a regional basis the effects are expected to be greater, and overall the net result, though small, will be more carbon emissions.

If states are setting plans for curbing carbon dioxide emissions, some like those in the Northeast will have an easier time than say those in the Southeast. The Northeast or north-central regions could probably keep their carbon emissions the same with no change in policy, Blasing explained.