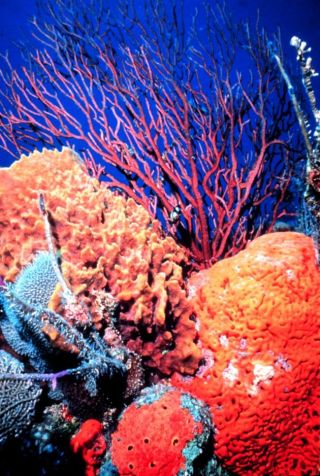 Already, damage to fragile coral reefs has been documented. Coral supports a range of other organisms, from the microscopic to small fish and the larger predators that feed on them.

Carbon dioxide from the burning of fossil fuels could overload the seas, researchers say in a new report designed to document what's known about the problem. The report echoes earlier warnings from individual scientists.

“It is clear that seawater chemistry will change in coming decades and centuries in ways that will dramatically alter marine life,” said Joan Kleypas, the report’s lead author and a scientist at the National Center for Atmospheric Research (NCAR) in Boulder, Colorado. “But we are only beginning to understand the complex interactions between large-scale chemistry changes and marine ecology. It is vital to develop research strategies to better understand the long-term vulnerabilities of sensitive marine organisms to these changes.”

The report, “Impacts of Ocean Acidification on Coral Reefs and Other Marine Calcifiers,” is the result of a a workshop funded by the National Science Foundation and the National Oceanic and Atmospheric Administration.

Oceans are naturally alkaline, and they are expected to remain so, but the interaction with carbon dioxide is making them less alkaline and more acidic, the report states. The increased acidity lowers the concentration of carbonate ion, a building block of the calcium carbonate that many marine organisms use to grow their skeletons and create coral reef structures.

“This is leading to the most dramatic changes in marine chemistry in at least the past 650,000 years,” said Richard Feely, one of the authors and an oceanographer at NOAA’s Pacific Marine Environmental Laboratory in Seattle.

The researches say organisms will grow more slowly, or their skeletons will become less dense, a process similar to osteoporosis in humans. As a result, reef structures are threatened because corals may be unable to build reefs as fast as erosion wears away the reefs.

“This threat is hitting coral reefs at the same time that they are being hit by warming-induced mass bleaching events,” said another author of the report, Chris Langdon at the University of Miami

Mass bleaching occurs when unusually warm temperatures cause the coral to expel the colorful microscopic algae that provide the coral polyps with food. Marine plankton and other small organisms are affected, and in turn salmon and other fish depend on these for food.

“Decreased calcification in marine algae and animals is likely to impact marine food webs and has the potential to substantially alter the biodiversity and productivity of the ocean,” said study co-author Victoria Fabry of California State University, San Marcos.