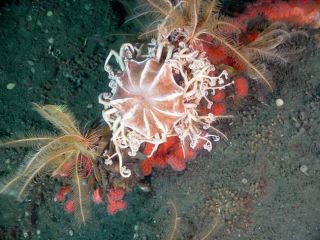 When you think of bright coral and colorful fish, you might conjure images of Hawaii or the Caribbean. If so, a newfound bed of deep-sea corals and other animal life found off the coast of Washington state will likely surprise you.

Researchers said an earlier survey had led them to suspect they might find a rich, unexplored ecosystem in the Olympic Coast National Marine Sanctuary. Today the NOAA-led project released several photographs returned by a remotely operated vehicle from 300 to 2,000 feet down. Among the most dramatic:

"We know that deepwater corals are an important part of the ocean ecosystem, but we know very little about them," said Timothy Keeney, co-chair of the United States Coral Reef Task Force. "Further study of this area shows promise in expanding our understanding of the ecological role of deep coral habitats, and perhaps even providing insights into the future impacts of climate change and ocean acidification on such important ecosystems."

The study followed up on preliminary findings in 2004 when NOAA scientists found small samples of a stony coral, Lophelia pertusa, the most important reef-building deepwater coral in the Atlantic Ocean but one rarely recorded in the North Pacific.

"We planned this research mission in the expectation that there would be more of these coral communities based on the limited information gathered in 2004 and from scientific literature," said NOAA investigator Ed Bowlby. "What we found, within the headlight of our ROV, confirmed that these coral communities are a significant portion of the ecosystem in the sanctuary. What lies outside of that headlight is intriguing and makes us eager to return."

The coral was found to provide havens for pregnant rockfish, and in several spots, egg cases from sharks were spotted. Some sharks, called oviparous, drop their egg cases or attach them to corals, where the young are born and fend for themselves.