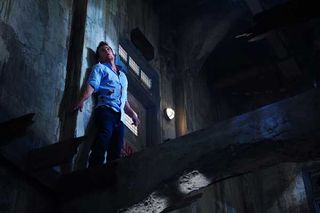 Disembowelment. Decapitation. People flailing around in a pit full of syringes. Who would want to watch that?

Plenty of people, if the success of the "Saw" movie franchise is any indication. The ultra-gory series about a serial killer who murders his victims with complicated traps has grossed $728 million worldwide so far. "Saw 3D," the seventh installment of the series due out Friday (Oct. 29), promises scenes of bloody death just in time for Halloween.

Psychologists have long struggled to understand the appeal of "Saw" and its ilk. Why would a species that evolved to seek out happiness and comfort willingly expose itself to horror? And why do some people love fright-fests while others can't even read a plot synopsis without their hands over their eyes? Are the horror-haters simply scaredy-cats?

Not according to recent research. In fact, horror film buffs seem to get just as freaked out by scary movies as everyone else. The difference is, they enjoy it more. [Top 10 Scariest Movies Ever]

Scared and loving it

For many years, psychologists had two theories as to why some people are drawn to scary stimuli. One theory was that those people simply aren't scared or upset by unpleasant stories or images. The other was that they are upset, but they're busy anticipating the moment when it will all be over. That sense of relief is thrilling enough that they're willing to sit through the scary parts.

But neither of those ideas jibed with what people were saying they felt during horror movies, said Joel Cohen, a professor of marketing and anthropology at the University of Florida.

"In the real world, people simultaneously can experience both happiness and sadness, exhilaration and anxiety," Cohen told LiveScience.

In the real world, most people also like a little bit of excitement, even if it's negative, Cohen said: "Otherwise, things could be pretty dull."

In a study published in 2007 in the Journal of Consumer Research, Cohen and his co-author, Eduardo Andrade, a professor of marketing at the University of California at Berkeley, decided to see what happens when you increase that level of excitement with negative stimulation. The researchers asked both horror movie-haters and horror movie-lovers to watch clips of scary films while rating their emotions. Both groups reported similar levels of fear while watching the clips. But only the horror movie-lovers got happier during the movies.

So some people like being scared more than others. But why?

The answer may lie in an aspect of personality known as sensation seeking. People who are high sensation-seekers thrive in response to intense experiences, said Marvin Zuckerman, professor emeritus of psychology at the University of Delaware. Those experiences can take the form of adventures like bungee jumping or scuba diving. Or they can be more mundane activities.

Sensation-seeking peaks in youth, and men are more likely to be high sensation-seekers than women. That's likely because of the influence of the masculine hormone testosterone, Zuckerman said. Testosterone production drops with age, possibly explaining why teens are a major market for slasher films.

Hormones aren't the only biological influence on sensation seeking. Researchers suspect that thrill-seekers are more responsive to the neurotransmitter dopamine, which is released in novel, exciting situations. They may also be less responsive to serotonin, which contributes to feelings of well-being, Zuckerman said.

Other personality traits are associated with a love of terror. One 2005 paper, published in the journal Media Psychology, analyzed multiple studies of horror film-fright and found that people who enjoyed the flicks tended to be male, and possess lower empathy and higher aggressiveness. A 1995 study published in the journal Human Communication Research found that female high-school students were more likely to identify with the victims in slasher films than were male students.

All of these personality traits are at least partially genetic, especially sensation-seeking, which is "strongly heritable," Zuckerman said. Multiple genes are involved; in 1997, researchers found one that accounts for about 10 percent of the sensation-seeking trait. That discovery, reported in the journal Molecular Psychiatry, revealed that people with longer versions of a gene for a particular dopamine receptor are more likely to seek novel experiences than those with a short form.

I do believe in spooks

While reactions to violence and gore may be encoded in our genes, horror movie-haters can train themselves to eke a little enjoyment out of the genre. Andrade and Cohen suspected that horror lovers are better at reminding themselves that the death and destruction onscreen is fiction. To test the idea, they trained horror-avoiders in the art of detachment. Horror-hating participants watched scary movie clips, but only after seeing biographies of the actors in the clips. During the bloodcurdling scenes, the researchers put head shots of the actors on the screen to remind the viewers that it was only a movie.

The trick worked. People who hated horror films who watched with the detachment reminders enjoyed the movies slightly more than those who watched the clips alone.

So what's a horror-hater to do when everyone else is getting into the Halloween spirit? You might take Andrade's suggestion and check out the behind-the-scenes DVD extras on "The Exorcist" before fast-forwarding to the projectile vomiting scene. Or you could repeat Cohen's mantra as you peer through your fingers at the latest "Saw" film: "No one's arm is being sawed off. It's a special effect. People are not being maimed. These are actors."

Or maybe you could rent "Casper the Friendly Ghost" instead.