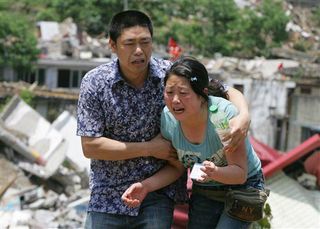 A woman grieves for her lost mother in Beichuan, in China's southwest Sichuan province, Sunday May 18, 2008.
(Image: © AP Photo/Greg Baker.)

The dire situations in cyclone-battered Myanmar and quake-tossed southwestern China and the impulse of many to offer relief have a lot to do with human nature. Our hunter-gatherer ancestors likely did it, and non-human primates do it.

We are hard-wired to help others, to drop everything in crisis situations, scientists say.

"People do really respond in these crisis situations where it's really a short-term matter of life or death," said Daniel Kruger at the University of Michigan's School of Public Health. The motivation to give dates back to our hunter-gatherer ancestors, he said. Some non-human primates also have been shown to step in during a crisis to help their kin or even humans.

Myanmar is an acute case, with the death toll at nearly 78,000, though expected to surpass 100,000, and up to 2.5 million people considered severely affected. And major relief efforts have mounted since Cyclone Nargis struck on May 2. In China, millions of dollars are also pouring into Sichuan Province, where more than 34,000 are reported dead and 4.8 million were left homeless from the recent earthquake and its aftershocks.

Several factors make acute disasters like these different from other human hardships, including their short-term nature, widespread images that tug at our heart strings, and the high benefits relative to costs of helping.

But we don't help everybody in need and some people even look the other way. The Myanmar government is a famous example, accused by many aid experts of doing much less than they could to help their own residents, even thwarting aid shipments.

In the end, looking out for "number one," could be the underlying reason we choose to help, or choose not to help others, one scientist says.

Countries and aid organizations across the globe have contributed volunteers and funding to aid in Myanmar's recovery. The most recent United Nations estimates put total pledges at $80 billion with intended pledges of another $50-plus million. The money and efforts boil down to individuals deciding to give.

"I think the help is triggered by seeing victims, imagining oneself in the situation, so basic identification and empathy," said Frans de Waal, a psychologist at Emory University and the Yerkes Primate Center, where he studies the evolution of human behaviors through primate research.

He added, "I doubt that we would be willing to help if we didn't have images, didn't have anything to hang our human response system to, which is geared towards emotionally loaded images."

Research has shown that helping others, either through donating money or time, makes a person feel good.

"When disasters strike or emergencies occur, people are motivated to help for a variety of reasons, mostly they feel badly for the victims," said David Schroeder, a professor of psychology at the University of Arkansas. "In order to deal with that negative feeling they're experiencing, one way to alleviate that is to help that person out of that plight."

Though the decision to help tends to be rooted in our evolutionary history and driven by emotions, a weighing of costs and benefits takes place, though not consciously.

In the case of Myanmar, "it's sort of a critical situation and a little bit of help could mean the difference between life and death," Kruger told LiveScience. "People are in a great state of acute need, and someone who has the power to help them would be motivated to do so."

The situations in Myanmar and China are acute, as opposed to a place like Darfur, where the inhumane acts are ongoing.

"There's probably more people dying [in Darfur] over the course of a couple months than died in the earthquake in China," Kruger said, "but at the same time you're not seeing as much motivation among large sectors of the public."

To make any difference in Darfur, he said, a person would have to make a much longer-term commitment that could be quite taxing, physically and monetarily.

Whether those in need are close relatives or friends also plays into that calculation, Kruger said. For our hunter-gatherer ancestors, who foraged in groups of 150 individuals, their "in group" included individuals they didn't have close relations with.

"They didn't necessarily have working relationships with everyone in the community," Kruger said. "If there was some kind of great threat, it would make sense to help out to save the lives of those other folks in your community, because otherwise you'd be decimated," he said.

Why we don't help

Severe restrictions imposed by the military junta in Myanmar have hampered relief efforts there, according to news accounts and U.N. press statements.

"You have this military dictatorship and their vested interest is keeping themselves in power," Kruger said, "at the expense of anything else."

In a recent Associated Press article, Tim Costello, president of the aid agency World Vision-Australia, said, "A circle has been drawn around Yangon [Rangoon] and expats are confined there. While you are getting aid through, it's like getting it through a 3-inch pipe, not a 30-inch pipe."

Though the junta are barring foreign entrance to Myanmar at the expense of humans, they are not operating under a different set of "human nature" rules, some experts say.

"In terms of the junta, exactly the same motives are driving them," Schroeder said. "They're worried about 'what's going to be best for me.'" For the junta, the costs of letting in aid or sharing all their resources may outweigh the benefits of saving the people, Schroeder said in a telephone interview.

Even the power of empathy has its limits.

"Empathy is a capacity we use freely with those close to us, but can disappear when there are competing interests," de Waal said. "For example, if letting in aid organizations undermines one's power (as may be the case with a military dictatorship), the empathy may be suppressed or not emerge at all."