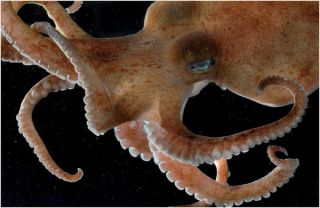 This deep-water octopus dwells in the dark, frigid waters of the Antarctic. Octopus are particularly common in the area, and lately seem to have become world travelers, spreading out from Antarctica to deep oceans across the planet.
(Image: © British Antarctic Survey.)

Antarctica is not exactly famed for its wildlife. Yes, everyone knows about penguins, but beyond the much-loved, waddling birds, the continentpresents a forbidding, snow-covered tableau, seemingly absent of beast or fowl.

Yet it turns out the seas around the frozen continent are home to a dazzling array of animal life — sea spiders the size of dinner plates, enormous octopuses, minuscule crustaceans — that has surprised scientists with its diversity and mysterious distribution.

As part of the landmark Census of Marine Life(COML), a $650 million, worldwide, decade-long effort to catalogue the creatures that live in the planet's oceans, 19 different voyages collected samples from more than 2,000 locations around Antarctica.

In the process, researchers inventoried 16,000 Antarctic species that are new to science. [See some of Antarctica's incredible sea creatures.]

The explosion of Antarctic exploration found the cold-loving, un-cuddly beasts of the polar region live mostly out of sight.

"Eighty percent of the species in Antarctica live on the seafloor — creepy, crawly, slimy, leggy things," said Huw Griffiths, of the BritishAntarctic Survey (BAS), a marine biologist who attended a news conference in London this week where they announced the formal conclusion and results of the COML.

Whose genes are those?

Griffiths said one tool that has driven the startling increase in the number of species scientists uncovered is DNA barcoding — a technique that allows scientists to swiftly differentiate species by examining their unique genetic signatures.

"There are very few people in the world who can be expert enough to identify a new species just by looking at it," Griffiths said. "So we can send off a piece of leg to a lab in Canada, and they can tell us if it's new."

A laboratory at the University of Guelph in Ontario, Canada, is behind the genetic profiling project and currently has DNA barcodes for more than 35,000 different species on file.

Dirk Steinke, the post-doctoral student who came up with the idea (and who receives some pretty weird mail), said researchers have to sendonly a small piece of a specimen. "About the size of a match head — that's the estimate I usually give," Steinke said.

Steinke said the program has rapidly expanded, up from only 8,000 species when it began in 2007.

Griffiths said the project has been particularly helpful for his frozen corner of the world.

"When we started on the Antarctic DNA barcoding campaign, we had 450 animals that had been done," Griffiths said. "Now that's up to 20,000 animals, from all over Antarctica. It's an amazing jump."

Those 20,000 animals belong to at least 4,000 different species, Griffiths said, and many more samples are in jars, waiting to be identified.

The flurry of discovery has revealed that many of Antarctica's species are unique.

Griffiths said that although the last decade has brought to light unprecedented new information, much work still remains.

Scientists are puzzling over the strange way Antarctic species have colonized the massive continent. Some of them seem to be everywhere, while other species are limited to a tiny portion of one small island.

"It opens up more questions than it answers almost," Griffiths said, "because we've got a level of detail that we never had before."