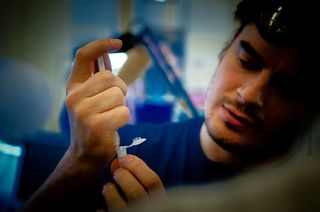 Looking for the nucleic acid precipitate after extracting DNA from green tea, during a DIYBio workshop at UCLA on Feb. 27, 2010.
(Image: © Kenneth Wei Photography)

Melanie Swan did not panic upon learning she had inherited a genetic mutation that seemed to put her at a higher risk of heart attack and cardiovascular disease. Instead she and another "garage biologist" ran a pilot study from their own homes and came up with a countermeasure.

They represent the vanguard of the do-it-yourself biology movement — DIYBio, which aims to spread the power of genetic understanding beyond research institutions and corporate labs.

A future full of garage biologists is far off, slowed by the expense of equipment and the difficulty of the science itself. It holds the promise of quicker and less-expensive treatments for disease, along with the other advantages — and dangers — of widely sharing such potent information.

Swan became enraptured with the transformative power of genetic science while working as an entrepreneur in Silicon Valley for 12 years. That led to her most recent startup, a nonprofit service called DIYgenomics.

DIYgenomics presents an open-source online and mobile platform for people to better understand what their genetic inheritance means in terms of certain health risks.

Android and iPhone users alike can download web apps that compare genomic sequencing services being offered by commercial companies. But DIYgenomics also guides the curious individual who wants to design studies about how a certain genetic makeup can affect one's athletic performance or response to a certain drug.

"We are trying to do preventive medicine," Swan said, by examining a person's genomic data in conjunction with physical measurements for certain conditions like macular degeneration and aging. "We're doing citizen science experiments, where we try different interventions to influence the levels of current biomarkers while they are still pre-clinical," she said

Anyone today can get his or her entire genome sequenced by commercial services  —  at a cost of thousands of dollars. But cheaper genetic tests, such as those offered by the company 23andme, also can give potentially useful information for people to act on.

Genetic testing revealed Swan was among the individuals who have inherited a deficient form of the MTHFR gene. The deficiency can lead to higher levels of an amino acid called homocysteine in the blood. Too much of this amino acid has been linked to a higher risk of coronary heart disease and stroke, according to the American Heart Association.

During her pilot study, Swan, her colleague and three other volunteers relied upon commercial blood-testing services to monitor their health condition. They also tested different treatments by methodically taking Centrum multivitamins and folic acid supplements.

By testing single and combination remedies in sequence, Swan found a particular intake of vitamin B9 and folic acid helped bring down her homocysteine levels. The overall pilot study succeeded in slashing homocysteine levels by 30 percent, she said — comparable to previous results from large-scale clinical trials.

Swan hopes the broader DIYBio movement can eventually help bring down the cost of running homegrown experiments. Rather than rely upon a commercial company's $100 lab blood tests for homocysteine, she envisions a shared lab space, with cheaper versions of finger-prick tests that can be read in real time.

The idea of citizen scientists in modern genetics goes back to the beginning of that field — it was an Austrian monk, Gregor Mendel, who discovered the laws of genetic inheritance by breeding pea plants in his monastery garden during the 1800s.

That kind of DIY spirit has inspired Biocurious, a nonprofit group located in Mountain View, Calif., which offers a community lab space for interested hobbyists and citizen scientists. Its efforts bring together people as diverse as molecular biologists, mechanical engineers, computer programmers and artists.

"With BioCurious, we are trying to provide essential infrastructure and an environment for a new generation of technologists to acquire the skills needed to leverage the power of cheap [genetic] sequencing and synthesis," said Joseph Jackson, co-founder of Biocurious.

Exactly when garage biology might truly take off remains unknown, Jackson said. Today's practitioners could merely be the equivalent of a 1970s home brew computer club — or they could embody the Internet in 1993 just before the first huge boom.

Operating without corporate money or government grants is difficult. To upgrade its facilities, Biocurious launched a project on the crowd-sourced website Kickstarter, where it raised more than $35,000 in pledges. (In return for contributions, it offered prizes beyond the usual T-shirts. Pledge contributors were able to snag a poster of their own fluorescent cells seen under microscope, and even had a chance to win a PCR machine, which is used for rapidly replicating pieces of DNA for analysis.)

The pledges, plus monthly membership fees — which according to the Biocurious founders are not expected to exceed $200 per month — would help upgrade the current lab to allow more-advanced research in hot areas such as synthetic biology, Jackson said. Unlike traditional genetic engineering, which typically swaps in pieces of existing genetic code, synthetic biology aims to make or redesign living organisms by creating code that does not already exist in nature.

A shortage of funding, equipment and expertise means garage biologists still can't come close to replicating the latest achievements of researchers such as J. Craig Venter. In May Venter's group became the first to transplant a synthetic genome into a living cell.

Biology is very hard," Jackson told LiveScience. "There is a tendency to overhype what can be done in the short term while not appreciating what can be done by citizen scientists in the long term."

Garage biology points to how the practice of science, and its benefits, can spread beyond the doors of major institutions, universities and companies. While scientists imagine such a leap would mean a future world where anyone with a home lab could create a better microbe to clean up oil, they also worry that same playing field could allow anyone to develop, say, a super-strain of the flu.

Such implications prompted the Presidential Commission for the Study of Bioethical Issues to investigate the future of garage biology, as part of a July meeting in Washington about synthetic biology. The commission convened again in Philadelphia and has another meeting scheduled for November in Atlanta.

Researchers already can put together a million base pairs from scratch. (A base pair consists of two nucleotide molecules that sit opposite one another on complementary strands of DNA and RNA.) In six more years, they might assemble 100 million base pairs, or close to the size of genomes belonging to the worm C. elegans or the fruit fly Drosophila.

Still, leading researchers face huge challenges in figuring out how to piece together the millions of DNA base pairs in a way that makes sense. Not knowing how to design a functional genome from scratch places huge limits on synthetic biology today.

Despite the current practical limits on both garage biology and synthetic biology, experts have begun considering how government regulators could monitor synthetic biology in the more informal settings of the garage lab.

More than half of Americans want government regulators to keep an eye on synthetic biology research, according to a recent survey. Just 36 percent would prefer voluntary guidelines developed by both industry and the government.

Yet detecting any threats or dangers from newly made, unknown gene sequences could prove tricky. No biosecurity system in the foreseeable future could predict the possibility of harm within a snippet of DNA, according to a report released by the National Institutes of Health in August.

The NIH did suggest that a system at least could screen for gene sequences of known dangerous agents, such as the Bacillus anthracis responsible for anthrax.

Companies that supply synthetic DNA have already begun to voluntarily keep watch, so that a customer's request for a particular gene sequence belonging to a harmful virus or bacteria might trigger a warning. The companies have also teamed up to spot other suspicious activities, such as a customer spreading his requests for gene sequencing among several companies.

But Swan of DIYgenomics said, "The shorter-term worry would be the inadvertent misuse of biohazard materials, rather than printing something harmful from DNA synthesizers."

While garage biologists have taken great pains so far to ensure safe working environments, Swan said, sharing expertise and equipment could reduce the more- immediate risks of a lab accident.

Experts take issue with the name DIYBio, pointing out that garage biology requires a group effort. Jackson of Biocurious said that he prefers the moniker "DIWO" for "do it with others."

At the July meeting of the presidential commission, Robert Carlson, head of the Seattle-based startup Biodesic, pointed out that open collaboration not only allows more experienced members of the community to help novices, but gives them the chance to monitor and discourage potentially dangerous or illegal activities.

"I think that trying to keep track of what people are doing, trying to have people volunteer and do it together, that's great," Carlson said.

The FBI seems to have embraced that collaborative approach, by openly attending many of the garage biology conferences and workshops in recent years. In turn, garage biologists have welcomed the FBI's interest, because the agency has made itself the obvious contact for any law enforcement-related issues that might arise.

No one can guarantee how well garage biology and synthetic biology will work together to forge the future. But one resource could provide a peek: Prediction markets have helped forecast everything from numbers of flu cases to Hollywood box office figures.

A prediction market focused on synthetic biology may soon get started, courtesy of a grant from the National Science Foundation and the Woodrow Wilson Center in Washington, D.C.

Just as stock market investors buy a Fortune 500 company's stock because they think the price will go up, prediction market participants place bets on certain outcomes, purchasing "shares" that pay out if their hunch proves correct.

The new prediction market aims to recruit a few hundred participants but could make do with just a few dozen, according to Patrick Polischuk, a research associate with the Woodrow Wilson Center's Synthetic Biology Project.

The effort is expected to help researchers pool their expertise regardless of whether they work in a government lab or in a garage.

"In terms of goals, this is as much an engagement tool as it is a predictive tool," Polischuk said in an e-mail. "It should be helpful to see what kinds of questions the synthetic biology community would like to ask, as well as helpful to potentially get some predictive answers."