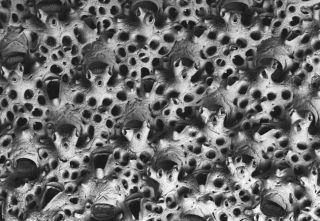 A tiny organism found in two seas far apart in Antarctica could have spread from one to the other only by means of a seaway across the continent, one that is now a layer of ice over a mile thick, a new study concludes.

Bryozoans — invertebrates sometimes referred to as moss animals — were found living on the continental shelves of two Antarctic seas, the Ross and Weddell, which are around 1,500 miles (2,400 kilometers) apart and separated by the West Antarctic Ice Sheet.

Scientists working with the Census of Antarctic Marine Life found striking similarities between the two populations of bryozoans, which suggests they had once come from a common colony that spread.

But the spread couldn't have happened through the ocean, the scientists say. Bryozoans living in the ocean anchor themselves to the sea floor, so it's very unlikely they would have traveled the long distances carried by ocean currents, said David Barnes of the British Antarctic Survey, a study team member. They would have stuck to the seabed early in their journey. Furthermore, bryozoans in the Ross and Weddell seas were found to be much different from the bryozoans in the ocean waters.

The only way these animals, 50 of which take up an inch (25 mm) of space, could have spread from one sea to the other is by taking a shortcut across the continent. Scientists think that the path was a trans-Antarctic seaway through what is now a layer of ice 1.2 miles (2 km) thick. That route, however, would have required some heavy demolition of the West Antarctic Ice Sheet. — a region that is thought to be vulnerable to collapse.

"Our new research provides compelling evidence that a seaway stretching across West Antarctica could have opened up only if the ice sheet had collapsed in the past," Barnes said.

This collapse and seaway opening could have happened during an interglacial — a warm period between ice ages — as recently as 125,000 years ago, when sea levels were about 16 feet (5 meters) higher than today.

By studying the bryozoans' presumed trek across Antarctica, scientists are hoping to learn more about the collapse of the West Antarctic Ice Sheet. Geological evidence suggests that this ice sheet collapsed at least once in the last million years, but scientists want to know why it happened.

"The West Antarctic Ice Sheet can be considered the Achilles' heel of Antarctica, and because any collapse will have implications for future sea level rise, it's important that scientists get a better understanding of big deglaciation events," Barnes said.

Scientists estimate that a complete collapse of the West Antarctic Ice Sheet would raise global sea levels by around 11 to 16 feet (3.3 to 5 m).

"This biological evidence is one of the novel ways that we look for clues that help us reconstruct Antarctica's ice sheet history," Barnes said.

The study is detailed in the September edition of the journal Global Change Biology.