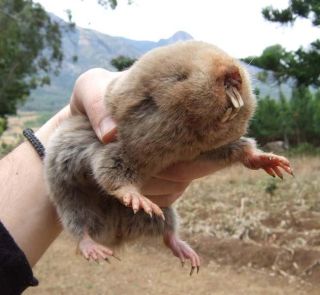 Researchers in the Czech Republic found evidence that two species of mole rats use their poor vision to detect breaches in their tunnels.

Mole rats spend nearly all their lives underground, but they are not blind as was long thought, and are even color-sensitive, new research confirms.

Anatomical research has shown that the tiny eyes of these subterranean creatures are ill-suited for their activities of navigating dark tunnels and making rare trips aboveground.

However, mole rats also plug their tunnels to keep out predators. According to a Czech study, two species of African mole rats appeared to use their limited vision to do so.

Detecting light from holes in their tunnels enables mole rats to quickly plug the holes to keep out predators like honey badgers and humans.

"Mole rats are a traditional food in many African regions," study researcher Ondřej Kott, a doctoral student at the University of South Bohemia, wrote in an e-mail.

In addition to detecting light, mole rats showed a limited sensitivity to colors during the researchers' experiments. They responded to blue and green-yellow light, but not to red. It was unclear whether they can distinguish between blue and green or green-yellow.

To simulate a hole-plugging scenario, the researchers placed the silvery mole rat and the giant mole rat into a maze of Plexiglas tunnels containing horticultural peat. Once they had the animals inside, the researchers covered the maze but illuminated the end of one tunnel with a 40-watt incandescent bulb. They then recorded whether the mole rats used the peat to block the light.

The giant mole rat tried to plug the hole in 80 percent of trials, and the silvery mole rat did so 85 percent of the time.

In a related test, mole rats were supplied with food and nesting material and given the choice between two nesting boxes, one dark and the other illuminated by white or monochromatic light. After 60 and 90 minutes, researchers checked the nesting boxes to see where the mole rats had settled down.

Mole rats preferred the dark box, avoiding the boxes illuminated by white, blue, or green-yellow light. However, they seemed to have no preference between a dark box and a box illuminated by red light, suggesting the animals couldn't detect red.

The first behavioral evidence that mole rats can distinguish between light and dark was reported in 2006, according to Kott. With this latest study, the ability to discriminate between light and dark is documented in five species of African mole rats. Separate research has characterized the eye and neural anatomy in 11 of the 22 known species.

"Broadly speaking, all species are well-equipped for image-forming vision but severely constrained in terms of visual acuity," Kott told LiveScience. In this family of rodents, "the brain only resolves a coarsely 'pixelated' image of the outside world."

There is plenty of other evidence that these subterranean rodents have not adapted to use their eyes in dark tunnels or aboveground. Most African mole rats have small lenses in their eyes that do not effectively collect light, and they lack the adaptations seen in nocturnal mammals for low-light vision. They also appear poorly equipped to orient themselves in the three-dimensional environment they would encounter on the ground, according to Kott.